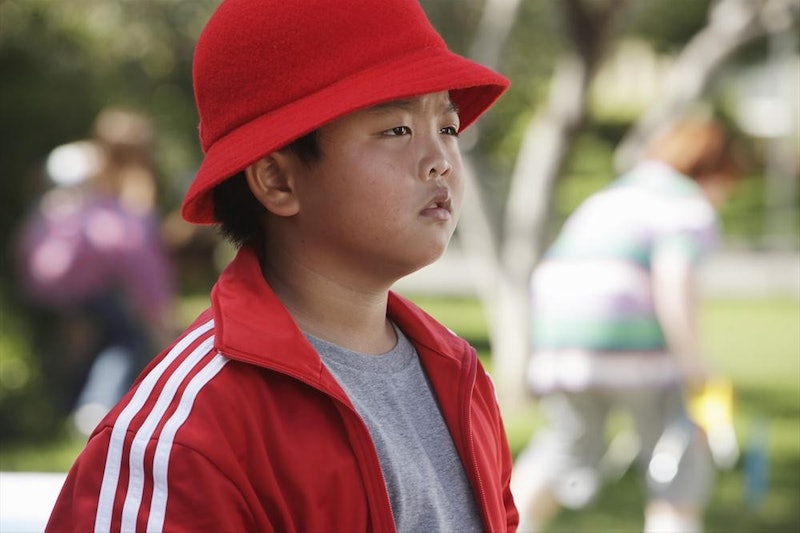 I'm more than thrilled to watch ABC's new comedy Fresh Off The Boat when it premieres Wednesday night — heck, it's been publicized as the first Asian American sitcom in over 20 years (Margaret Cho's All-American Girl went off the air in 1995); there's no way I'm going to miss it. There's also the little fact that Nahnatchka Khan penned the pilot — which is a tidbit that Don't Trust the B in Apartment 23's cult fandom (myself included) is sure to get behind. And then there's kid actor Hudson Yang, playing Eddie at the center of the show. This is shaping up to be a great new sitcom.

Inspired by Eddie Huang's memoir of the same name, Fresh Off the Boat centers on the life and times of... well, Eddie Huang (the grade school version of Eddie, at any rate), a first-generation American dealing with a jarring transplant to a very-white suburb in Florida (fun fact: the pilot was titled Far East Orlando). And the ultra-hilarious Yang plays the protagonist, of course — he's a relative unknown at this point, but judging from the promos, he's going to be giving his onscreen dad (played by The Interview's scene-stealer Randall Park) a definite run for his money in the comedy department.

What else do we know about him, though? Let's recap:

According to Yang himself in an NPR interview, his decision to become an actor went a little something like this: "We were watching TV together and I was like, 'Dad, I want to act,' and he's like, 'What? Really?'" He quickly nabbed a good agent after wowing casting directors for a part in a movie (that he incidentally didn't get) — and the rest is history.

You Might've Seen Him in The Sisterhood of the Night

Hudson recently appeared in The Sisterhood of Night, a film self-described as "a modern version of the Salem witch trials." Sounds cool, right? Narnia fans will also be happy to hear that it starred the former Lucy Pevensie.

Non-fictional Eddie has attitude to spare (did you see his awesome takedown of ABC's tastelessly tone-deaf Fresh Off the Boat tweet?), so it makes sense that it would be something he was looking out for when it came to casting his onscreen counterpart. In a Wall Street Journal article (which just so happens to be written by Hudson's real-life father, columnist Jeff Yang), Huang said:

Hudson had a natural kind of orneriness to him ... He didn’t seem to care [about getting the role]. Hudson is comfortable in his own skin, and he’s not overeager to please. That’s rare in a 12 year old. And he also has these mannerisms you just can’t teach.”

Which brings us to...

The clip's pretty self-explanatory — this kid's got comic chops to spare.

Can you say "rising star"?