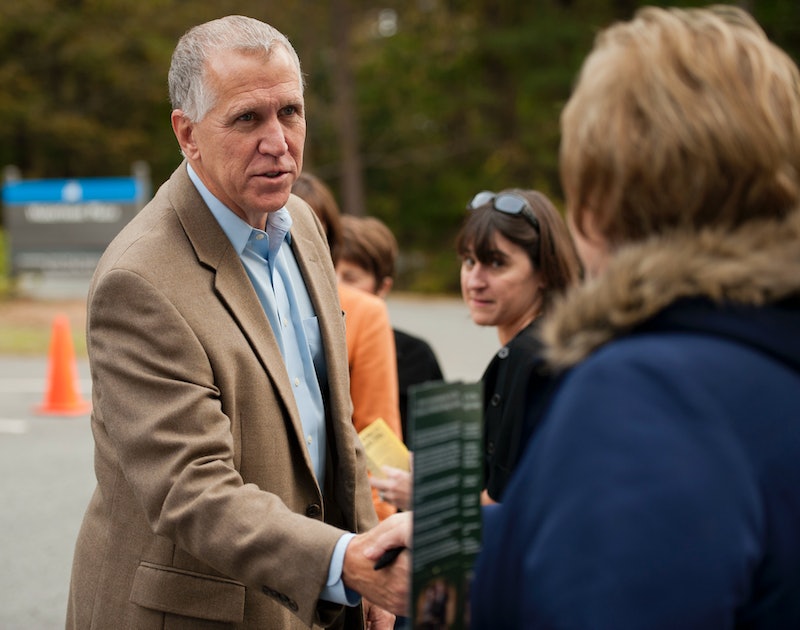 In the GOP fight against the big bad government’s health regulations, newly minted Tea Party Sen. Thom Tillis (R-NC) claimed that restaurant employees should not be required to wash their hands after going to the toilet. Trying to keep fecal matter out of food items is clearly a violation of a business’s liberty to decide how best to run its shop, the GOP senator argues. In lieu of a regulation requiring hand-washing in restaurants, Tillis suggests instead that we require restaurants post signs in their bathrooms alerting customers to the fact that they are not complying with the hand-washing norms. (Because logic.)

Tillis brought up the hand-washing example to prove his regulation-shy credentials when speaking at a forum at the Bipartisan Policy Center on Monday. According to the freshman senator, he had stopped for coffee at a Starbucks in his district back in 2010 when the question of restaurant sanitation regulations came up in conversation.

Tillis stressed how he thought the market should be allowed to register customers’ preferences for clean establishments where the food is fecal-matter free rather than depending upon the government to push such harsh requirements down on small businesses just trying to make rent.

His conversation partner (expectedly so) expressed strong disbelief that Tillis would be so lackadaisical when it came to health and sanitation regulations and asked him specifically about whether he thought employees had to wash their hands after using the restroom.

I don’t have any problem with Starbucks if they choose to opt out of this policy as long as they post a sign that says we don’t require our employees to wash their hands after leaving the restroom. The market will take care of that. It’s one example….[Opting out of that regulation] is probably one where every business that did that would go out of business. But I think it's good to illustrate the point, that that's the sort of mentality we need to have to reduce the regulatory burden on this country.

As the panel concluded, Bipartisan Center president Jason Grumet told Tillis that he was a bit leery about shaking his hand afterwards.

The Food and Drug Administration, of course, has a slightly different perspective on the matter:

Proper hand-washing reduces the spread of fecal-oral pathogens from the hands of a food employee to foods. Hand-washing can also help reduce the transmission of other pathogens from environmental sources. Effective hand-washing includes scrubbing, rinsing, and complete drying of hands and is essential for minimizing the likelihood of cross-contamination.

In conjunction with the Centers for Disease Control, the FDA has identified a number of highly infective pathogens that can be spread through food if employees do not follow the appropriate hygiene practices, including Norovirus, Hepatitus A, Salmonella and E. Coli.

For the FDA, requiring employees to wash their hands is not a matter of protecting business owners’ autonomy rights but of protecting unwitting customers from sicknesses and contaminants. Even if we grant Tillis’ scenario that restaurants post a sign in the restroom alerting customers that they have entered a hand-washing free zone, how often do customers make a beeline for the bathroom before ordering their pumpkin spice latte and muffin?

While intended to score political points with the Tea Party base, Tillis’ point mirrors a troubling trend in the rhetoric around government regulation. By placing public health and sanitation concerns firmly within the purview of the market, anti-regulation politicians merely transfer the risk from the business onto the customer. As coffee drinkers in a regulated environment, we trust that when we go into an establishment, we do not need to inspect the kitchens or the barista's hands before we decide whether or not to buy.

As customers, we trust that companies will not sell us plastic baby toys coated in toxic chemicals — chemicals that we would not even recognize as toxic if we knew the names — because the government regulates and enforces those regulations. Sometimes the market will correct for bad business practices, and sometimes we decide that the risk is either too great or the regulation so practical that businesses can rightly be judged to bear the burden of it.

The most amusing counterpoint to Tillis’ general unconcern with Starbucks baristas preparing his food without washing their hands first is that the senator made heavy use of the ebola scare during the final months of his 2014 campaign against the Democratic incumbent for his seat, Kay Hagan. Time and time again, Tillis decried the loopholes and failings of the U.S. public health system and its regulations around passenger travel from West Africa.

Cue Tillis during one of his campaign debates with Hagan, trying to scare up North Carolinians into voting for harsher border controls against “foreign pathogens”:

Ladies and gentlemen, we’ve got an Ebola outbreak. We have bad actors that can come across the border. We need to seal the border.

Apparently, protecting public health becomes a matter of serious concern for Tillis when there are political points to win.