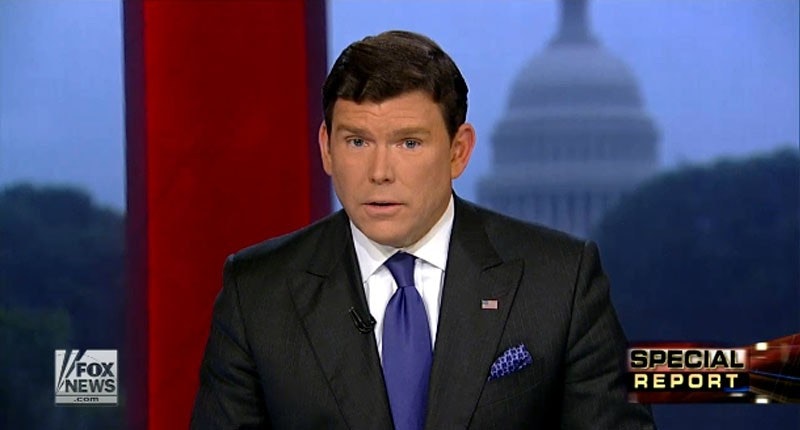 Following footage ISIS broadcast Tuesday of the burning to death of Jordanian pilot Moaz al-Kasasbeh, killed by the terrorist group after weeks of negotiations with Jordan had fallen apart, U.S. networks like CNN declined to show graphic images from the video. Meanwhile, Fox News did an about-face Tuesday and aired footage on Fox's "Special Report" of al-Kasasbeh burning in a cage, having previously implied the network would describe the video over broadcasting it.

The Huffington Post highlights comments anchor Bret Baier made while showing images of the video Tuesday night, which sharply contradicted ones Shepard Smith made earlier in the day. Smith had said after the video's release that, in lieu of broadcasting the video, he would explain what it showed to quash viewers' curiosity:

I’m going to tell you about it, all of it, every bit of it.... I watched it over the last hour, not because I wanted to. I absolutely did not. I watched it because I felt like those of you who want to know what’s on it, but don’t want to watch it or be subjected to some sort of gruesome descriptive adjectives, can get the information.

Make no mistake: The video is violent for violence's sake, just like every other video ISIS has broadcast of its executions of foreign hostages, and it's deeply disturbing. This is a group that's killed thousands of civilians in 2014 alone and executed American and British hostages on tape to send a clear message to the countries currently striking ISIS (of which Jordan is one). There's nothing to be learned about ISIS' barbaric methods or ideology from watching the video, seeing images of the video, or otherwise engaging with a piece of content that ISIS, make no mistake, wanted the Western world to see.

It's not just that Fox aired images of the video. The reasoning offered by Baier is, perhaps, more problematic: Fox did this, he said, to "bring you the reality of Islamic terrorism." Fox has come under harsh criticism for misunderstanding Islam in the past — who could forget the city of Paris suing Fox for saying there were Muslim "no-go zones" in the city? — but the term Islamic is irrelevant here. Terrorism, for terrorism's sake, would have been a far more useful way to describe ISIS' actions. Islam is, of course, a peaceful religion, and stands entirely at odds with ISIS.

In fact, Muslims are the group ISIS has harmed most of all. Not only do many now believe "Islamic terrorism" and "Islam" are synonymous, but thousands of Muslims in Syria and Iraq — thousands is a mild estimate — have been slaughtered by ISIS, according to the UN. Terrorism waged by ISIS has nothing to do with Islam, and to run the two together, as Baier did Tuesday, only deepens the suggestion that Islam in and of itself is somehow to blame for ISIS' atrocities.

It's unclear when al-Kasasbeh was killed — it's possible he was dead even before the hostage negotiations begun — but Jordan quickly reacted to the barbaric, public video by hanging two Iraqi prisoners being held in the country.