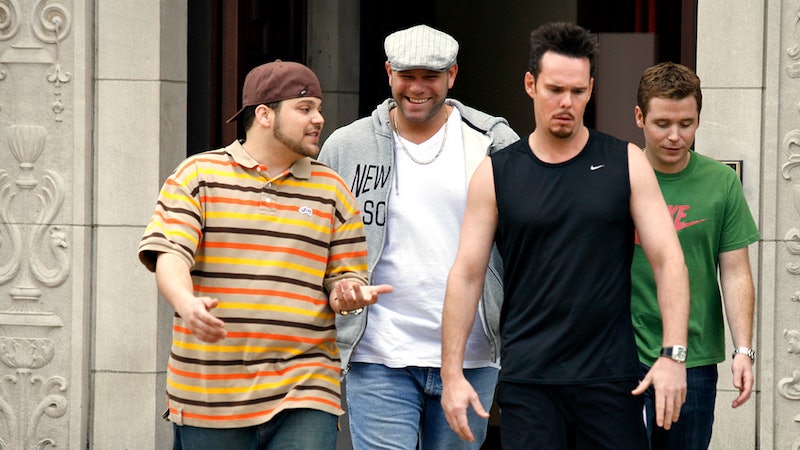 The Internet has been unleashing its wrath of judgment upon "basic bitches" for long enough, so it's high time that Basic Bros came under scrutiny too. They might not like pumpkin spice lattes (or at least they would never admit to liking them), knee high riding boots and referring to their friends as "sisters", but Basic Bros exist, and they're just as basic, if not more offensively so, than their female counterparts. Basic Bros are pretty sexist without even realizing they are, which makes it even worse. They're righteous about their often politically incorrect opinions, loud, obnoxious, and generally dudes you don't want anywhere in your near vicinity when they're out drinking for "boys night".

The question you're likely asking yourself now is, "Am I a Basic Bro?" or, "Is this person I know a Basic Bro?" Maybe. Probably. A lot of bros are pretty basic. Don't cry! Honestly, it could be worse: You or someone you love could be a pretentious "bohemian" trust fund bro. There are so many kinds of bro a person can be, and Basic isn't even remotely the worst among them. The thing about Basic Bros is that they can pop up anywhere: While they're generally thought of as working in finance (no more specific details are given; if you ask what exactly they do, they'll just respond how How I Met Your Mother's Barney does: "Please."), but the truth is, we can find Basic Bros across all walks of life. There are hip-hop loving Basic Bros, Hollywood Basic Bros, sports fan Basic Bros—the list goes on. It doesn't matter what type of bro is basic, what matters is the sum of the parts that add up to make him basic. And here they are, for you to determine if you're basic, or if some bro you know is.

2. You think Seth MacFarlane is funny.

3. You say Fight Club or American Psycho is your favorite movie but really it's Crank or anything else with Jason Statham in it.

4. Your Tinder photo is of you and all your basic bro friends in shiny polyester suits at a wedding, or you posing near a chained up tiger at some exploitative tourist location in South East Asia.

5. You un-ironically call everyone "bitch".

6. Every time someone brings up injustice concerning sex or race you say things like, "How come white men aren't allowed to complain about that?" and you sincerely wonder why so many people are complaining because seriously, you NEVER complain about all the sexism/racism you encounter.

7. You think Crazy Town is the most underrated band ever.

9. You're perpetually trying to reclaim the "glory" of your freshman year of college even though all you did was binge drink and have selfish 3-minute sex.

10. All your stories revolve around the time you and your buddies got drunk five or more years ago and puked/got in a fight/got arrested/ate junk food/blacked out.

11. You still don't really know where the clitoris is, and aren't overly concerned about finding out.

12. You think wearing a backwards baseball cap is actually neat.

14. At one point or another, you have been shirtless in the snow.

15. You have also been shirtless on a public dance floor.

16. You think drinking in a sauna or hot tub with all your basic bro friends is "making it".

18. You wear a lot of tank tops with low cut arm holes.

19. Your favorite comedian is Daniel Tosh.

20. You have that J.Crew gingham shirt, and think J.Crew is the height of "class".

21. You refer to your wife or girlfriend as "the old ball and chain."

23. YOU LOVE VEGAS. Even if you've never been, in theory, you still love Vegas. If you have been, you refer to your Vegas trip all the goddamn time.

24. You have, at one point in your life, had a wall or shelf lined with empty beer cans and/or bottles because you thought it was a cool way to make your home more "arty".

27. You think your GQ subscription makes you classy.

28. You have titty magazines next to your toilet.

29. You live for Entourage.

30. You comment, passionately (albeit often with politically-incorrect opinions), on VICE posts.

31. You block your sister on all social media.

32. You have catcalled a woman you didn't know on the street, most likely while driving past with your Basic Bro friends, hanging out the window wearing neon rimmed sunglasses and blasting Avicii.

33. You love any kind of movie or TV that has to do with gangsters/The Mafia and features a lot of cocaine done from glass tables with guns laid out of them by swarthy guys in satin shirts and gold chains.

34. You hang your baseball/basketball/NFL team hats on the wall in a display.

36. You go to bars with your Basic Bro friends, comment on all the hot chicks in the room, and then proceed to never actually talk to a single woman there.

37. You think it's sexy when girls are good at "guy stuff" like drinking beers and playing Buck Hunter.

38. You have a string backpack.

39. You always wind up ordering a round of Fireball shots for all your bros when you're out at the bar.

40. You have a group text chain with all your fellow bros in which you talk about sports, naked women and how drunk you were on the weekend.

41. You're still obsessed with Breaking Bad.

42. You have at least one poster of Michael Jordan or LeBron James.