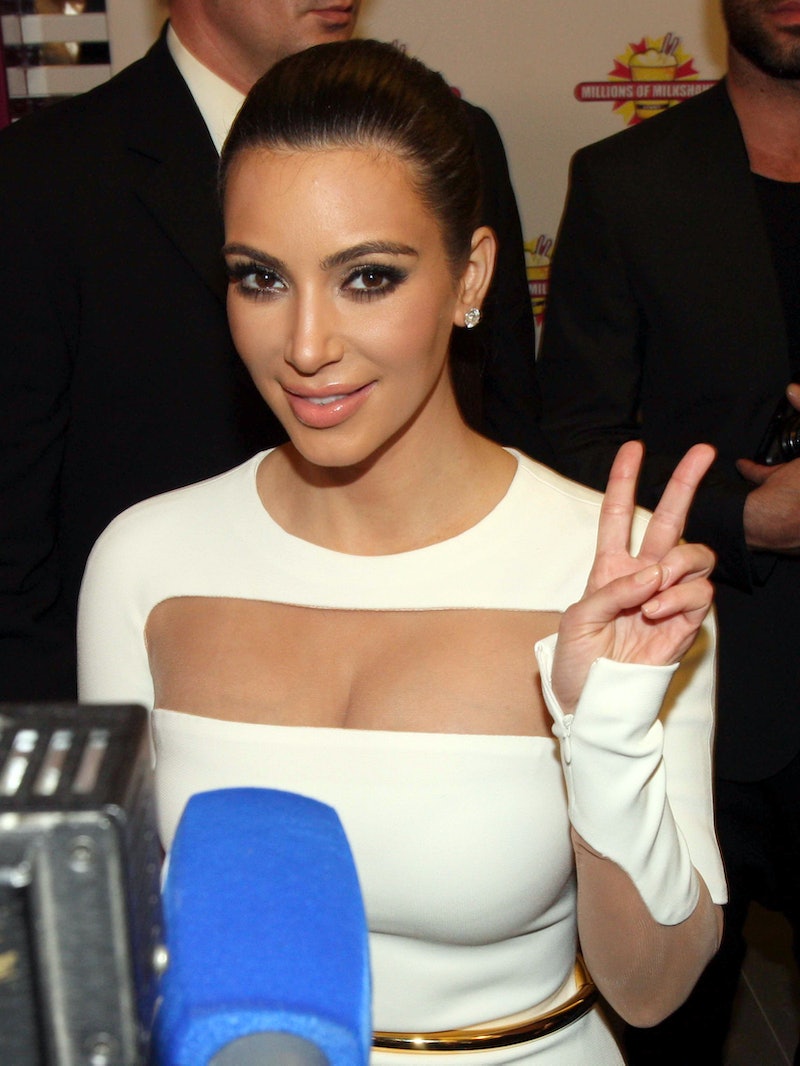 Fifty Shades of Grey may not be my cup of tea, but, with all the buzz around the movie, I'm clearly in the minority. Plenty of people are excited to hit the theater on Valentine's Day and see the book come to life via Dakota Johnson and Jamie Dornan, especially after the first full, sexually charged Fifty Shades Of Grey scene was released earlier this week. Obviously, this movie is A Big Deal, and those of you who have been counting down the seconds to February 14 totally understand that. And, as it turns out, not even celebrities are immune to the pull of Fifty Shades — Kim Kardashian included.

This is probably going to make you a little jealous, so read on with caution. Kardashian has already seen the movie, because Kardashians get to live their lives with awesome perks like that, and, according to her, it's fantastic. I mean, no shock there — Kim K's mentioned in the past that she was a big fan of the books, so why wouldn't she like the movie? On top of that, her sneak preview happened in a private screening which, um, I'm sure a lot of people wouldn't mind having when they see this movie. For, um, reasons.

And as far as celeb Fifty Shades fans go, there are practically enough to start a fan club.

Jolie was reportedly up for the role of Anastasia, but, obviously, it didn't work out. No hard feelings here — Jolie sent director Sam Taylor-Johnson an e-mail that said "good luck on your journey" anyway. Can we talk about how classy Jolie is?

The Pretty Little Liars star is a self-proclaimed Fifty Shades fan, and she considers the books the "junk food" of the literary world.

"I'm reading a lot of different books, but I always think I have to switch it up a little bit. It's like food — everything in moderation, same with my books, same with my reading. You read books that are good for you and you learn a lot of stuff, then you read Fifty Shades of Grey, which is like candy. Bad junk food. But it's good. But it's bad junk food."

Yet another PLL star who's crazy about Fifty Shades — so crazy, in fact, that she was hoping to play the lead role back when the film was still casting. "I've read every book. I want to play Anastasia!" she said.

Longoria was super stoked to run into author E. L. James backstage at The View in 2012, and even had her book handy. How cute is this?

When Duff talked to Celebuzz in 2012, she was only 25 pages short of finishing the first book, so she's definitely a fan. And as far as casting? She wanted Ryan Gosling to play Christian, and that would have been amazing. Why did she not cast this movie?!

While talking to Glamour, the former Spice Girl revealed that she's a huge fan of the books and even bought copies for her mom, who, unfortunately, would now like to discuss them with her. I can't imagine anything more awkward in the world.

"I'm halfway through the second one [Fifty Shades Darker]. I even bought my mum the book! But every time she tries to engage in conversation about it, I kind of dodge the subject. I don't really want to talk to my mother about S&M!"