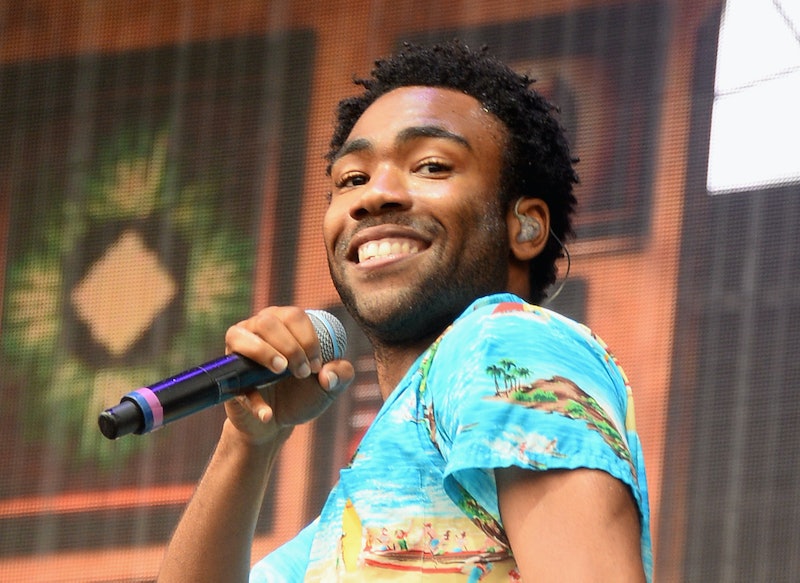 Childish Gambino has had a big year. Not only has the young rapper broke out into the mainstream hip-hop world, he's also up for two Grammy nominations this year — for best rap album and best rap performance. And not only that, when he's not performing under his stage name, he goes by his real name, Donald Glover, and is a very successful actor. Not only did he star on Community and have a role on Girls, he'll also appear in the highly anticipated Magic Mike XXL this year. Since Glover has had such a successful year career-wise, some fans might be wondering if the hip-hop and film star is also finding some success in terms of his love life, namely, the question of whether Donald Glover is single at the moment.

It has been reported that Glover is on the market (so there is hope, ladies!), but there is a twist. Rumors have been swirling for quite some time now that he has been seeing Jhene Aiko, a Los Angeles-based singer who has collaborated with Glover professionally before and has also toured with Drake. As of right now, both Glover and Aiko have said that they are just friends, but both have dropped hints that a romantic relationship is not entirely out of the realm of possibility. They both have said wonderfully charming things about one another in interviews, and, as we all know, the foundation for a good relationship is oftentimes a good friendship first. We'll have to stay tuned to see if these two actually end up together, but if they do, it looks like they already have a strong bond to stand on, which is always a great start!

According to Glover, the two first bonded over a shared love of music, which makes sense, since that's what they are both passionate about for their respective careers. He opened up more about what he likes about Aiko in a podcast interview back in 2013. He said,

I think she’s special. She doesn't need anyone. Like that’s the thing. Even if we were together, she wouldn’t really belong to me. She doesn't belong to anything… She's off in her own world. I remember I was talking to her about music and we were just talking and chilling and she was like, "I make songs. I just write songs and I make music. That's it."

He certainly speaks highly of someone who is supposedly just a friend!

For Aiko's part, she hasn't held back while talking about Glover, either. She said she felt a connection with him both on a level of humor and creativity in a 2014 interview with Complex magazine. It was in that interview that she confirmed the two were just friends, but she also took the chance to hint that they could possibly become something more. She said,

We have the same sense of humor, very sarcastic and dry. It was automatically like, "I like you! We can be friends." He’s an actor. We’re both creative people. We are friends and we hang out. We’re just friends but I’m also single, so you never know what friendships can develop into. We like each other as people, so you know, who knows?

Again, for being just friends, she definitely seems to admire him quite a bit.

We'll have to see if their friendship does develop into something more. Maybe he'll have a plus-one to the Grammys? Keep your eyes peeled!