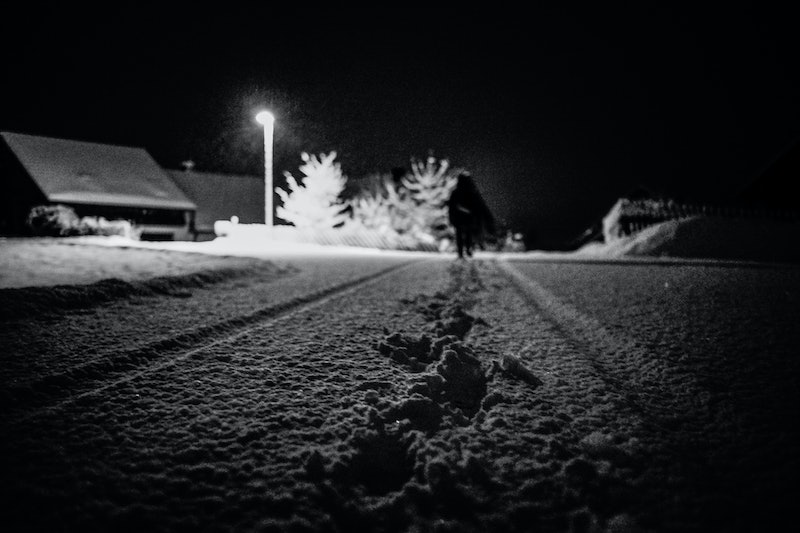 Once upon an especially rotten time, I sat in a park after detailing to a friend a recent batch of bad luck. He sighed. "Well, nothing good happens after 2AM," he said, all wise-looking. Later I learned he stole this chunk of sage advice from How I Met Your Mother , but that doesn't discredit the truth in there. Sometimes we make bad decisions in life. Often those bad choices yield regret It's out there! And it's inevitable! There's no way of preventing it—but there is a way of at least reducing your opportunities to let it into your life.

Did you know there's a thing called decision fatigue? Because there is and it basically indicates that our ability to have sound judgement varies depending on time of day. By the end of the day, we're all pretty spent physically, emotionally, spiritually—and most importantly, mentally. We all know the obvious stuff it's inadvisable to tackle post-midnight: Don't call or otherwise directly contact any former romantic partners, refrain from jumping into loud home improvement projects if you have neighbors, etc. Everyone should know these basic things already. However—bummer news—the list of things you should never do after midnight bleeds into less obvious, seemingly innocuous activities. Let's work on whittling down our future regret list right now. Here's some stuff you should just never attempt after midnight:

Even if you're dead sober, don't do this if it's too late at night. Just...do not. If you make just one typo and it's certifiably the middle of the night, your colleague will definitely imagine you sitting stoned, drunk, or mad-eyed with insomnia at your keyboard. And if you're cool with tackling business with a diminished mental capacity, why should they trust you with large, serious projects? Should you find yourself up late and feeling productive, draft your face off in response to work communication. Just wait until morning to re-read before you hit "send".

Unless you swapped numbers that night and in person, resist the urge from initiating contact with a new person super late at night. Especially if you ever want this person to take you seriously or go out with you. Example: I swapped numbers with a few dudes from Tinder before I deleted the app. That was two weeks ago. Two nights ago, I got a text from one at 12:33AM that read, "So you do you wanna go to some dive bar or something soon?" Sure, I was up and doing laundry at a friend's place, but I was more keen to mock the message with said friend than positively reply. Scuzzy move, bro.

Leaving your house if you're not already out

Your friends may have successfully guilted you into coming out for "just one drink, come on, it won't be a late night, okay?" No-kay, bb. If it's after midnight and you're still in leggings, cradling a bag of corn chips in your arm nook, may I suggest just staying that way? Either you will fall asleep on the filthy bar or you will stay out for one drink times 14 (that's 14 drinks, math wiz) and not be home, safe in your bed until 4AM. Propose an alternative night and keep on corn chipping.

If you set aside the corn chips and take a quick nap at midnight, surely it's chill option that allows some social interaction after? Right? NOOO. You're almost definitely not wake after the 20-minute alarm you set sounds. You're going to sleep until morning. If you somehow manage to pull this off and do wake up to go out, know that your face skin will retain the general firmness of an old peach, aka, everyone out will see the sheet indentions on your otherwise adorable mug. And if you're already out and start trying to justify taking a small public nap so you can rally and keep partying? Seriously, go home, dude.

A bulk of experts agree that any time post-sunset is the worst time to load up your plate. For starters, that's when your body needs calories the least. And miserable bonus: eating late in the evening generally yields less satisfaction, so we end up chomping away long after our bodies have gotten what they necessarily need. If you're totally starving when it's dark out, try to opt instead for completely depressing alternatives like carrots, celery, or chugging a bunch of (decaf) tea. You'll wake with a lot less regret, promise.

Making permanent changes to your appearance

A tattoo will be there, on your body, forever, so why rush? Get a few hours' sleep and reflection under your belt before you go under the needle. Not to mention that by midnight, most artists would have been working for about many hours, if they're even still awake. Book an appointment earlier in the day when the artists are more likely to be chipper, aware, and have cramp-free wrists.

Making semi-permanent changes to your appearance

A short-sighted tattoo may yield more catastrophic long-term regret, but semi-permanent appearance changes can summon their own spread of problematic repercussions. Like self-tanner? I feel this is generally a bad call, but with bleary eyes and an exhausted application style, you could easily end up with some hella nasty brown streaks on your body. And those streaks are probably gonna hang out for...a while. Like two weeks. Same could be said about improperly applied at-home hair dyes. Who wants colorful ears? Not me and I'm guessing not you, either.

A friend recently introduced me to his new, rather nice acoustic guitar. "Oh!" I said, "Do you play?" His face slacked. "...No," he said. Apparently it was an impulsive midnight purchase, made after he had consumed a bottle of wine on his own (no judgment). This is why God invented online shopping carts (really? Then who did?) Consider it the "Drafts" folder of online purchases. There's no reason you need to go leather jacket shopping in July while living in Miami. Maybe just take a second peak in the morning.

Even arbitrary decisions like, "Oh hey, maybe I should paint my room this color," seem best settled during daylight hours. This absolutely goes for more lasting (potentially binding) deliberations. Because the sad truth is, in this unfair life, there is no CTRL+Z command. When you can't undo so many decisions, it's probably best to hold off on making any at all until you can do so with a rested brain and wide-open eyes in the light of day.

Having a serious discussion

Get into a fight with your significant other/crush/friend/bodega clerk? Do your damndest to smooth and run. SMOOTH AND RUN. Pick it up in the morning when you're both better hopefully calmer (and/or more sober).

I couldn't find any science studies to support this but I have a lot of personal, anecdotal research to back this up: Should you double-tap on a crush's 52-week-old selfie, there is no going back. With both a weary brain and finger dexterity (not to mention if you're going about all of this sans glasses with one eye closed while laying in bed...guh), you're more likely to slip and expose your stalking. It's all even worse if you're digging deep into an old acquaintance's former roommate's vacation photos. Then there's less explanation even. (What are you even doing there!?) You can't trust yourself. Always internet stalk people when you're well-caffeinated and focused.

Posting almost anything on social media

This rule goes double if said post has any remotely subtweet (i.e., passive aggressive) qualities to it. Examples of Very Bad Ideas: a selfie of any kind, thoughts on dating, thoughts about sex, broken Spanish anything, links to emo songs, lyrics from any songs. Examples of Less Bad Ideas: photos of your pet being cute, Joan Didion quotes, links to '90s Jock Jams, declarations of love for Bustle, etc. Some safe options do exist. But mostly, just go to sleep. You're not getting any younger.