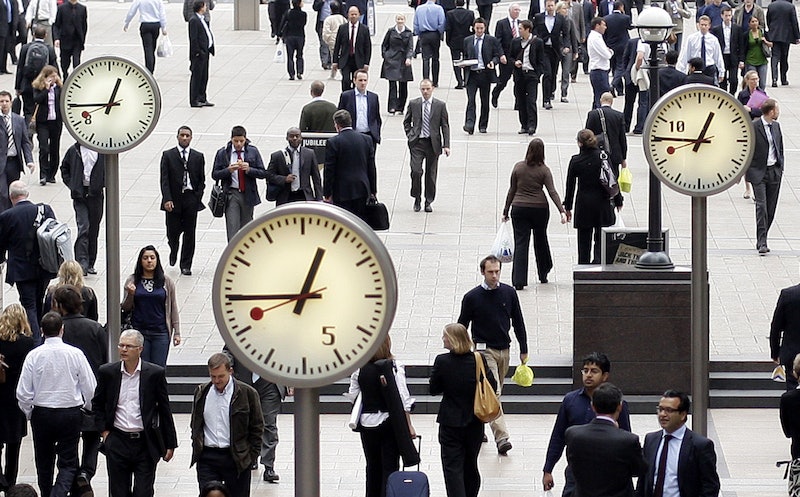 It's an age-old question: If you could know when you were going to die, but couldn't do anything about it, would you want to know? Well, science might be making that question more than theoretical in the form of a DNA "clock" that can predict when someone will die. Who needs psychics and seers when you have science?

The "clock" looks at what researchers refer to as a person's biological age, which is determined by analyzing chemical changes in a person's DNA. During the study, researchers tracked over 5,000 participants age 50 or above for up to 14 years, comparing their actual age to their biological age. Apparently, as time goes by, DNA sequences begin to undergo what's known as methylation, a process by which chemical compounds called methyl groups attach themselves to DNA. The study found that people whose DNA show more signs of methylation than one would expect for someone of their age — that is, people whose biological age exceeds their actual age — are more likely to die sooner rather than later.

In fact, people whose biological age is at least five years "older" than their actual age have a 16 percent higher risk of mortality, regardless of cause. This pattern held even when the scientists controlled for factors such as chronic illness and lifestyle considerations such as smoking.

In other words, if your genes are wearing out, that's bad.

Of course, this isn't actually some sort of doomsday clock that can spit out your date of death. For one thing, the clock isn't really a "clock" so much as a bunch of tests that scientists can run. And even if it were a clock, it can't do more than help experts make an informed prediction as to what your life expectancy most likely is. Which doesn't actually mean that's what your lifespan will actually be.

Still, this does raise some interesting questions. As science gets better and better at understanding death, how long until their methods of prediction get more accurate, and more specific? Will clocks that can count down to your expected date of death someday be more than science fiction?

Well, if they are, it'll be a long ways into the future. For now scientists hope to investigate what factors might contribute to a person's biological age increasing faster than it should, and to use this new discovery about the link between DNA methylation and mortality to help in other research.

As the study's principal investigator, Dr. Ian Dreary from the University of Edinburgh explained, “This new research increases our understanding of longevity and healthy aging." Which is good news for anyone who plans on living long enough to get old. So here's to the "DNA death clock." Who knew something out of a sci-fi dystopia could be so useful?