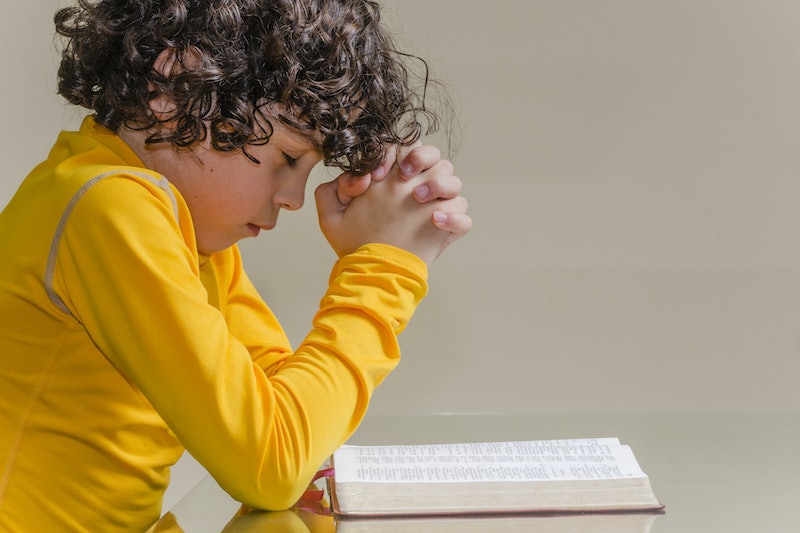 Gone are the days of the unyielding God-fearing mother as the archetype of good parenting, suggests a recent article from the Los Angeles Times. According to multiple reports, research has shown that a secular upbringing may be healthier for children. According to a 2010 Duke University study, kids raised this way display less susceptibility to racism and peer pressure, and are “less vengeful, less nationalistic, less militaristic, less authoritarian, and more tolerant, on average, than religious adults.” But the list of benefits doesn’t stop there.

Citing Pew Research, the Times’ Phil Zuckerman notes that there’s been a recent spike in American households who categorize themselves as "Nones" — their religious affiliation being “nothing in particular.” According to Zuckerman, modern nonreligious adults account for 23 percent of Americans. As early as the ’50s, that figure was only four percent. And with godlessness on the rise, researchers have begun analyzing the benefits of nonreligious child rearing more closely.

“Far from being dysfunctional, nihilistic and rudderless without the security and rectitude of religion,” writes Zuckerman, “secular households provide a sound and solid foundation for children, according to Vern Bengston, a USC professor of gerontology and sociology.” Bengston oversees the Longitudinal Study of Generations, the largest study of families and their religious affiliations in America. After noticing an uptick in nonreligious households, Bengston added secularism to the study in 2013. “Many nonreligious parents were more coherent and passionate about their ethical principles than some of the ‘religious' parents in our study,” said Bengston in an interview with Zuckerman. “The vast majority appeared to live goal-filled lives characterized by moral direction and sense of life having a purpose.”

"For secular people, morality is predicated on one simple principle: empathetic reciprocity, widely known as the Golden Rule. Treating other people as you would like to be treated. It is an ancient, universal ethical imperative. And it requires no supernatural beliefs.”

And check this out: Atheists “were almost absent from our prison population as of the late 1990s,” accounting for less than half of one percent of inmates, according to reports by the Federal Bureau of Prisons. “This echoes what the criminology field has documented for more than a century,” Zuckerman writes, “the unaffiliated and the nonreligious engage in far fewer crimes.”

Additionally, a troublesome report from the BBC last year found that religious children were less likely than their nonreligious peers to distinguish fantasy from reality, based on a study conducted by Boston University. Presented with realistic, religious, and fantastical stories, children were then asked whether they thought the story was real or fictional. Researchers found that “[c]hildren with a religious upbringing tended to view the protagonists in religious stories as real, whereas children from non-religious households saw them as fictional.” And why is this problematic? Because it muddies the waters of a child’s differentiation between reality and fiction, and even the spiritual from the fantastical.

“For secular people, morality is predicated on one simple principle: empathetic reciprocity, widely known as the Golden Rule. Treating other people as you would like to be treated,” writes Zuckerman. “It is an ancient, universal ethical imperative. And it requires no supernatural beliefs.”

Read Zuckerman’s full report over at the Los Angeles Times. And then with all this in mind, go forth and rear your godless hellfire demon children, y’all.

More like this
Starbucks' Summer Menu Includes A New Chocolate Cream Cold Brew
By Emma Garza
How To Fight For Reproductive Rights, Based On How Much Time You Have
By Courtney Young
The Music Industry Continues To Fail Black Women
By Precious Adesina
23 Abortion Funds In States With Trigger Bans To Donate To
By Emma Carey
Get Even More From Bustle — Sign Up For The Newsletter