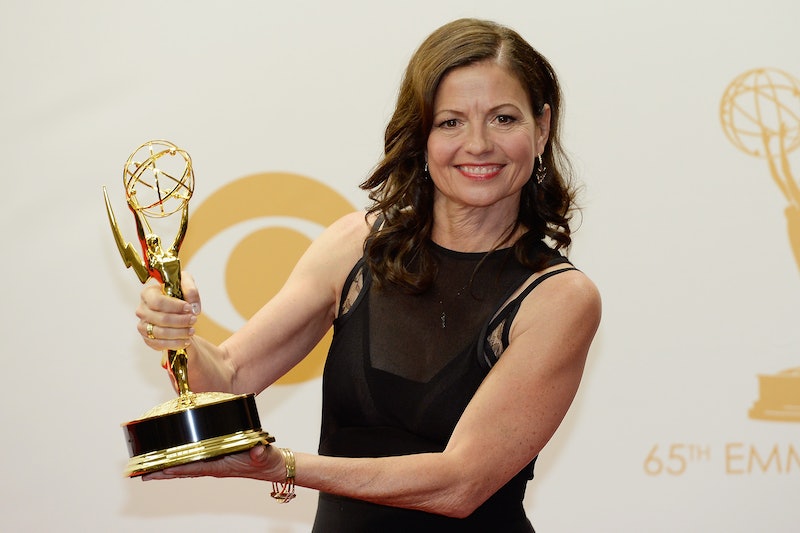 The Directors Guild of America just released a diversity survey of American directors from 2012-2013... and it hasn't changed much in the past few years. Television directors are overwhelmingly white and male, with 72 percent being both male and caucasian, 12 percent female and caucasian, 14 percent male and minority, and a mere 2 percent being both female and minority.

Some of the worst offenders and best proponents of having diverse directors may surprise you. Shows like It's Always Sunny in Philidelphia, Workaholics and Sullivan and Son hired no female or minority directors. At all. The Office, New Girl, Scandal and The Mindy Project were among the shows that hired minority or female directors for fewer than 15 percent of their episodes, and Treme, Girls, Modern Family, 30 Rock, Community, The Killing, The Walking Dead, The Newsroom and Pretty Little Liars were in the DGA's "Best Of" list, meaning that more than 30 percent of their episodes were directed by a woman or a member of a minority.

There are a lot of quality shows in the DGA's "Best Of" list for a reason. Having a diverse range of perspectives in the cast and crew of a television show makes the show richer and makes it resonate with more people. It can also save the show from blindly offending people who aren't there to give their input. While these statistics don't tell the whole story (The Mindy Project may be on the "Worst Of" list, but it was created by a member of a minority and a woman), encouraging shows to hire more women and minorities can only make them even better.

So to give them a little inspiration, here's a some of the women and minority directors behind some of your favorite shows:

Why You Should Watch: To say that MacLaren has had a huge hand in Breaking Bad would be an understatement. She's directed so many episodes of the show that she got a Directing nomination at this year's Emmys. Since the show has gotten heaps of praise since it's last episode, it would be entirely idiotic not to hire her as a director, and it will definitely be interesting to see what she does next.

Why You Should Watch: Dickerson learned from one of the greatest — back when he worked as a cinematographer, he collaborated with Spike Lee on six films, including Do The Right Thing. The first episode he directed for The Wire, "Bad Dreams," won an AFI Award for the show. Dickerson has directed scores of episodes for some of the best dramatic shows on television, and David Simon, showrunner for The Wire and Treme, has nothing but praise for his work.

Why You Should Watch: Of the four directors that Saturday Night Live has had since its inception, McCarthy-Miller has been the only woman — an being a woman in a high-stress gig like that, you have to be especially tough. Fortunately, she caught the eye of Tina Fey, who hired her to direct a boatload of 30 Rock episodes. Tina chose well, because McCarthy-Miller got an Emmy nomination for her directing on the show in its final season.

Why You Should Watch: Gail Mancuso is a veteran sitcom director who got her big break the same place many of today's TV greats did: Roseanne. The shows she's been on range from great to dismal (for every Scrubs, there's a Sh*! My Dad Says), but Mancuso's work is a standout nonetheless — she snagged the Emmy this year for Outstanding Directing for a Comedy Series for her work on Modern Family.

Why You Should Watch: Barclay has won two Emmys and garnered seven nominations and directed everything from dramatic comedies to crime procedurals. He is also the current President of the Directors Guild of America, and is both the first person of color and the first openly gay man to hold the position. And really, anyone who can get two Emmy nominations for directing the sprawling mess that is present day Glee has some serious talent.

Why You Should Watch: Whittingham has been all over sitcom land in the past few years, to our benefit. He won an Emmy back in 2010 for his work on 30 Rock, but his best work was the frighteningly on-point "Queen of Jordan" episodes, which earned him his final of three nominations for his work on the show.