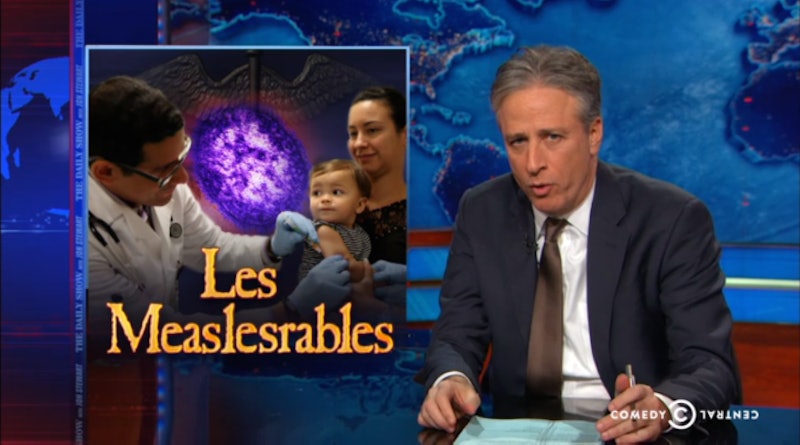 With the resurgence of measles currently vexing public health officials across California — over 50 cases have been reported there, tied to a recent outbreak at Disneyland — many people have been feeling frustrated with the so-called anti-vaccination movement. Actually, more frustrated than usual might be the better way to say it, since countless people in California have been endangering putting public health in favor of debunked non-science for years. Want some catharsis? Well, you're in luck: Jon Stewart's blow against bipartisan anti-vaccination hysteria is spot on, and definitely worth watching.

Make no mistake, anti-vaccination conspiracy theories are hardly contained to one political ideology. Despite The Daily Show being a pretty reliably liberal show, there's no getting around the degree to which the left is implicated in all this awfulness. After brushing up his audience on the details of the outbreak — how measles had been effectively eradicated about 15 years ago, before its return to the limelight at the so-called Happiest Place on Earth — Stewart turned his focus to the "science-denying, affluent California liberals."

In a particularly heartbreaking moment for me personally, he played a clip of a woman from Marin County (my beloved lifelong home, more or less), explaining why so many citizens of the liberal enclave are passing on vaccines.

We live here in Marin County, which is a liberal place. It's a well-educated group of people, it's a thoughtful group of people, and I think if parents are choosing not to vaccinate it's for a reason.

Of course, for those of us here in Marin who re actually thoughtful — thoughtful enough to want to avoid the measles, at least — it's a different story. Vaccines have been the subject of a massive amount of scientific study, and have been deemed safe time and time again, with the exception of one instance of overt fraud that's more or less fueled opposition for years.

But, as Stewart demonstrated, it's not hard to find conservative and libertarian voices who are just as eager to stoke fallacious anti-vaccine sentiments. It is, to put it bluntly, one of those wonderful issues where people on all sides of the political spectrum can sound incredibly ignorant, even people who ought to know better. Stewart followed up with a clip of GOP Senator and possible 2016 presidential candidate Rand Paul, who proved just that point.

I think the parents should have some input ... I've heard many tragic cases of walking, talking, normal children, who would up with profound mental disorders after vaccines.

Paul's raising of this irresponsible, highly charged allegation is something we've seen in Republican politics before (hell, he did it himself about Ebola). Back in the 2012 presidential primaries — then, it was Rep. Michele Bachmann who insisted a woman told her vaccines had caused her child's "mental retardation." Beyond the insensitive turn of phrase, it was a wildly unfounded claim, and one Bachmann was apparently willing to parrot in the midst of a presidential campaign because... somebody walked up and told it to her?

Stewart also touched on New Jersey Governor Chris Christie's somewhat uninspiring take on vaccination, saying that while he vaccinated his own children, that parents needed to have "a measure of choice." Whether that's a mainstream view or not — countless people believe vaccinations shouldn't be mandatory, I admit — it's pretty disheartening to see major politicians pandering to the anti-vaccination movement, especially at a time we badly need more clarity about their safety and essentiality, not less. Kaci Hickox, the nurse that Christie had forcibly quarantined for Ebola when she, you know, didn't have Ebola, has been particularly upset by his vaccination hair-splitting.

All in all, it was a compelling segment by Stewart and his writers, and one which went over a lot better than his new follow-up show's tackling of the issue. The Nightly Show, starring the great Larry Wilmore, stirred up some controversy with their recent episode on vaccination, seating an anti-vaccination advocate in their panel debate with nobody else well-informed enough about her specific conspiracy theories to coherently, specifically rebuke them. While there's no harm in representing those views if adequately challenged, the challenge part is really important. Besides, giving a megaphone to such views can be truly, tangibly dangerous.

Luckily, Stewart avoided that altogether, and his response to Rand Paul's dissembling was maybe the perfect statement on the whole issue: "Oh, for f*ck's sake."