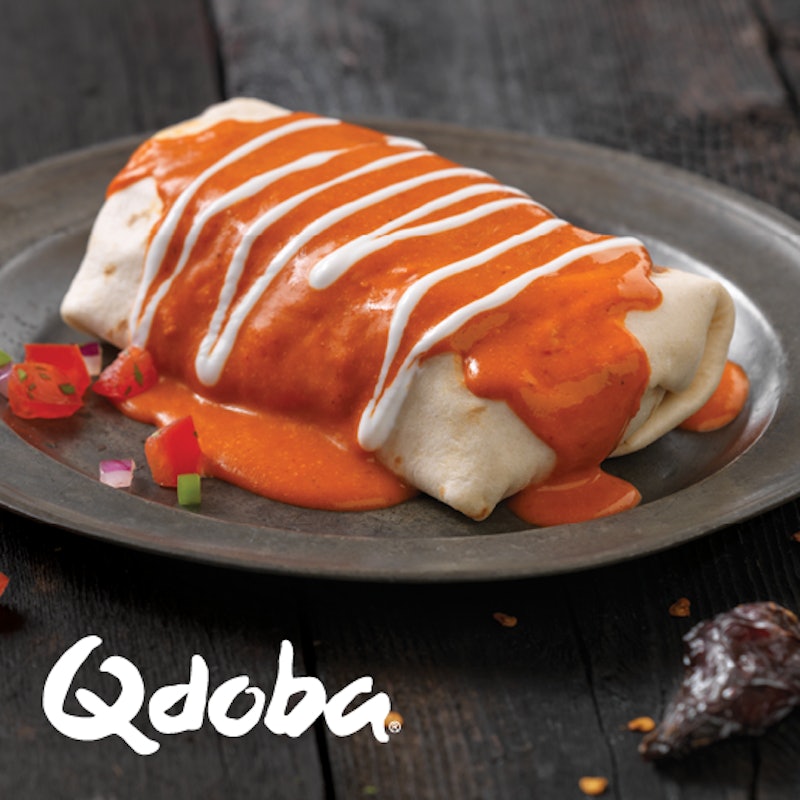 Nothing says “I love you” like a free burrito, and this Valentine's Day, Qdoba Mexican Grill is happy to oblige: To promote their newest Smothered Burrito option, the chain will be offering free burritos on February 14th. There's a catch, though, and some of you may not like it: You have to kiss someone first. Awesome? Creepy? You be the judge.

According to a press release, a new Smothered Burrito sauce — Savory Queso — will be making its way onto the Qdoba menu on February 12. To bring together the new launch and Valentine's Day all in one mildly wacky promotion, a deal going by the name of “Smothered for a Smooch” will be on the menu all day long. It's a BOGO deal, so you can't just kiss someone and ask for free food in exchange; you have to buy a Smothered Burrito on your own first. Once you've put in your order, puckering up with the person of your choice will then entitle you to a second Smothered Burrito absolutely free.

If you bring a friend, family member, significant other, or other type of loved one, Smothered for a Smooch is a pretty good deal: You both get to chow down for the price of one. However, as Consumerist notes, the one thing that's a little concerning is the suggestion of “a willing stranger” being a suitable kiss recipient. In light of this slightly bizarre option apparently being on the table, I think it's important to lay down a few ground rules:

Before you go anywhere near anyone else with your plump and sensuous lips, ask them if it's OK for you to do so first. I mean it. Kissing someone without their permission is a huge, huge no-no.

2. If they say no, respect their response.

In other words, don't kiss them if they turn you down.

Unless you have explicit permission from your partner in burrito-ness, keep your tongue inside your own mouth.

5. Return the favor if they ask for it.

Of course, even if you abide by these rules, kissing a stranger for a burrito also comes with a whole lot of other uncomfortable questions: Namely, what do you do with the free burrito? Do you give it to the person who allowed you, an unknown quantity, to smooch them? Do you kiss them, grab the burrito, and run? Do you split it? In an ideal world, I suppose you'd both kiss each other and walk away with two burritos each; heck, maybe people might even be feeling extra generous and go gift the bonus burrito to someone else entirely. Valentine's Day pay-it-forward burrito chain, anyone?

Anyhoo, find out more about Qdoba's Smothered for a Smooch promotion here. Happy Valentine's Day? Or… something?