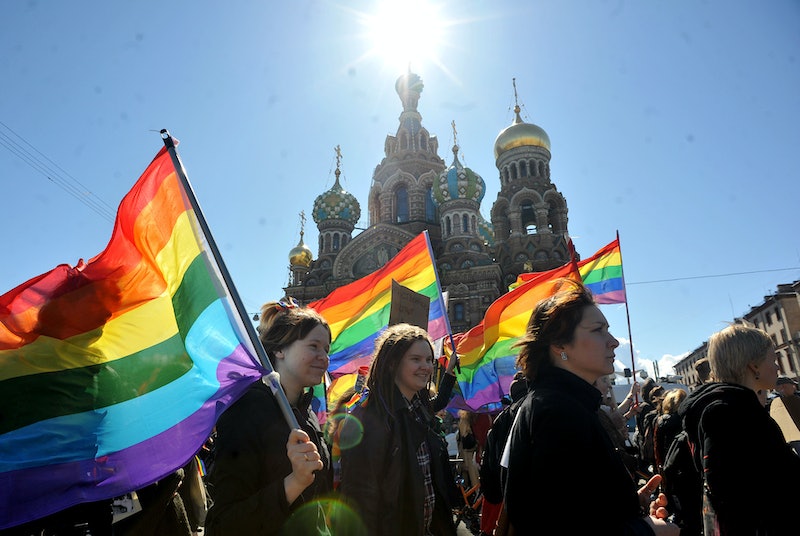 The next time anyone tries to tell you that selfies can never be anything but vapid and narcissistic, go ahead and show them this. Two Russian women photographed themselves kissing in front of Vitaly Milonov, one the leaders behind Russia's new homophobic laws. You go ladies!

The selfie, which was posted by the ladies on social media and has since gone viral, depicts a lesbian nightclub owner who goes by Kseniya Infinity and an unnamed female partner kissing on a plane, one row in front of Vitaly Milonov, the politician who was the driving force behind Russia's new laws against "propaganda of non-traditional sexual relations among minors." The photo was taken on a flight from Moscow to St. Petersburg, and comes at a time when Milonov is trying to pass even more laws to ensure there are no loopholes in Russia's same-sex marriage ban.

According to Meduza, the photo's caption on VKontakte (the Russian version of Facebook), reads as follows.

Lots of people are asking me about my last post: did we really go and kiss in front of Milonov? Was it really Milonov? Maybe it was just somebody who looked like him? What was the flight like? and so on. Here are my answers: Yes it was really Milonov! As fate would have it, he was sitting in the row right behind us. The whole flight from Moscow to St. Petersburg, Milonov said nothing to us. We staged the photoshoot in front of him, and he hid behind his tablet, when he realized. We’re all super happy. Him — probably not so much. But who cares! Attached is the rest of the photoshoot.

Milonov, unsurprisingly, was unhappy when he learned about the photo and used it as an opportunity to make even more comments about LGBT people, whom he has often spoken of as mentally "sick."

"The lesbians went through with this photo session due to their stupidity," Milonov told Agence France-Presse. "It shows that all LGBT people are mentally ill. They have overdosed on so-called European values." He also suggested he wanted legal action against the two women, saying, "They should have to do a photo session in a police station," and that he would be investigating Kseniya Infinity's St. Petersburg nightclub, Infinity, which caters to a lesbian clientele.

Because he's not homophobic at all, he just thinks that gay people having fun all in one place is bad for the children. Plus, these ladies arguably made him a co-star in the very type of gay propaganda he's been trying to hard to outlaw, which is embarrassing and therefore he as an elected representative ought to be allowed to abuse his power of office to retaliate. NOPE.

In all seriousness, hopefully these lovely ladies don't have to deal with any unpleasant consequences for their picture. Because clearly they are both phenomenal.