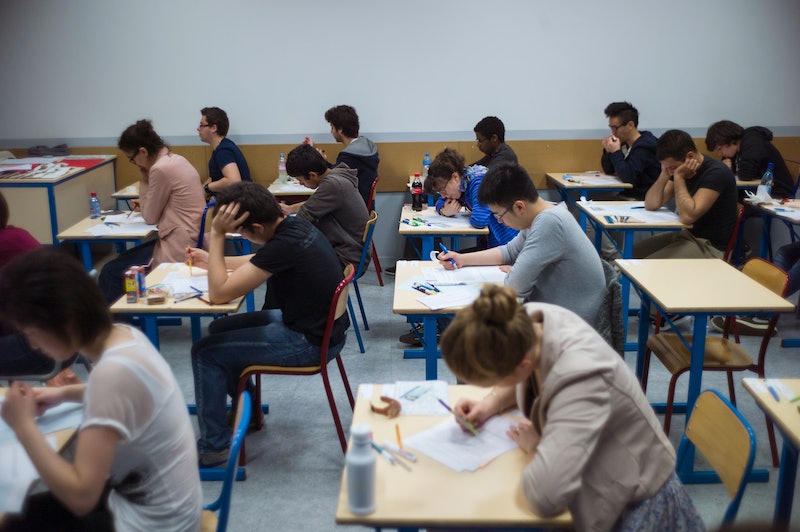 Sexual assault education might be coming to a high school near you. On Tuesday, Sen. Claire McCaskill (D-Mo.) and Sen. Tim Kaine (D-Va.) introduced a measure that would make sexual assault prevention a part of sex education in public middle and high schools around the country. The bill, formally known as Teach Safe Relationships Act of 2015, focuses on a range of sexual violence, from sexual assault and harassment to domestic and dating violence.

According to Kaine's office, the measure also builds upon the Violence Against Women Act by initiating new prevention programs and policies in regard to sexual assault, domestic violence, dating violence, stalking, and sex trafficking. Kaine noted that because young women between the ages of 16 and 24 endure the highest rates of intimate partner violence, it's important to promote safe relationship behavior at a young age. McCaskill added in a statement:

One thing we've learned in our work to curb sexual violence on campuses and in the military is that many young people learn about sex and relationships before they turn 18.

According to The Huffington Post, the Teach Safe Relationships Act stemmed from a recent meeting between Kaine and One Less, an anti-sexual assault organization at the University of Virginia. The senator met with the group after the shocking Rolling Stone feature — which later had its veracity questioned and partially debunked — about on-campus sexual violence.

Despite the unraveling of the Rolling Stone story, anti-sexual assault advocates have continued to press forward in curtailing sexual and dating violence among women and men. The statistics still remain alarming: A study from the U.S. Department of Justice published in 2014 found that from 1995 to 2013, young women between the ages of 18 and 24 had the highest rate of rape and sexual assault out of any age group. About 80 percent of rape and sexual assault victims knew their assailants — a statistic that gives credence to this new push to focus on dating violence and what qualifies as consent.

McCaskill and Kaine are looking to include the Teach Safe Relationships Act in the reauthorization of the Elementary and Secondary Schools Act (a.k.a. the No Child Left Behind Act). It's currently unclear if Republican lawmakers will support this sexual assault prevention and education (but let's hope they do).