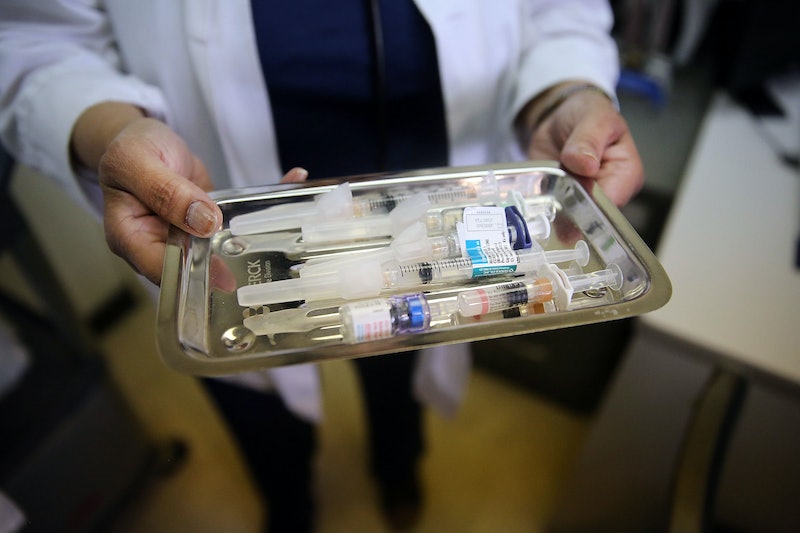 All of a sudden, the issue of mandatory vaccination has entered the political sphere. The 2016 presidential hopefuls are all loudly voicing their opinions after a recent measles outbreak in Disneyland turned into a national issue spanning more than 100 cases spread out across 14 states. It was New Jersey Gov. Chris Christie who said he himself had his kids vaccinated, but he didn't agree with mandatory vaccination, per se. "Parents need to have some measure of choice in things as well, so that’s the balance that the government has to decide,” Christie said before swiftly "clarifying." So, why are all these possible presidential candidates suddenly speaking out about the state of vaccination?

It appears that staying silent is exactly how a candidate will be forgotten by the collective conscious, potentially harming their chance at getting nominated or elected. Just last month, 13 potential Republican candidates spoke their piece at the Iowa Freedom Summit, an event whose relationship to the election is similar to that of fantasy football's with the NFL. Of those 13 hopefuls, five have issued statements regarding vaccination. For all their backtracking and contradictory statements, it is those candidates whom the media continues to talk about and interview, keeping them in the country's focus.

Staunch libertarian Rand Paul went the ideological route and proclaimed that vaccination was, in fact, "an issue of freedom." He, too, backtracked, going so far as to invite the press to watch him get a Hepatitis A vaccine to prove his support of science. During the vaccine, Paul — who is, oddly enough, an ophthalmologist — suddenly shirked his previous response echoing anti-vaccination rhetoric that incorrectly links vaccines to autism and developmental issues. He said:

Louisiana governor and perennial presidential hopeful Bobby Jindal simply said that "it is irresponsible for leaders to undermine the public's confidence in vaccinations that have been tested and proven to protect public health. Science supports them and they keep our children safe." Ted Cruz and Marco Rubio issued similar statements, as did Hillary Clinton and Dr. Ben Carson.

According to the nonprofit ProCon.org, though there are no stringent mandates in place to vaccinate children, all 50 states require that children be vaccinated before they enter the public school system. Every single state has a way for parents to circumvent that, ranging from religious reasons to simple philosophical beliefs. According to the CDC, 322 million childhood illness cases have been prevented thanks to vaccines — and that's just in the span of 10 years, from 1994 to 2014.

Former Florida Gov. Jeb Bush was the latest presidential hopeful to give his two cents. His response about the issue of vaccination was incredibly succinct. He then followed that statement up with comments on another pressing candidate issue — misrepresentation in the media. Says Bush: