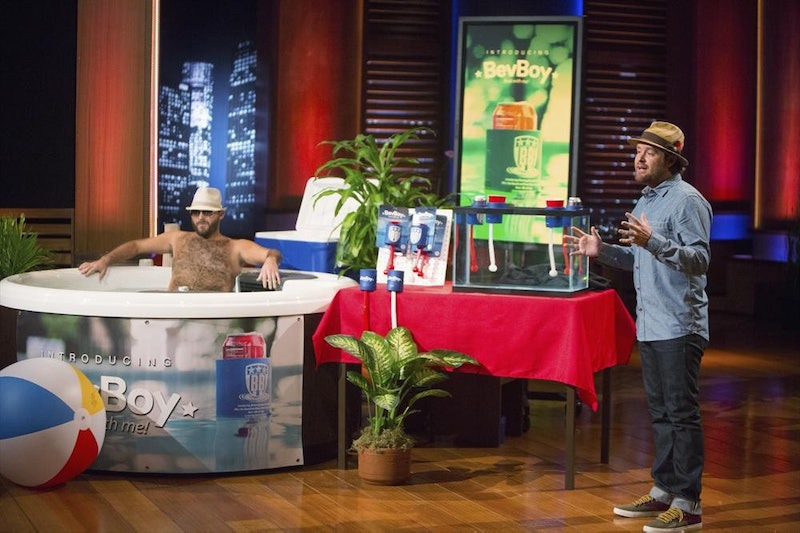 We still may be in the thick of winter, but it's never too early to start planning for warmer weather. OK, yeah. That pile of snow outside your door may be saying otherwise, but Shark Tank still wants you to believe that summer is just around the corner. And when it arrives, you might just want to invite over a BeverageBoy, which will appear on Shark Tank on Friday night.

What is a BeverageBoy exactly, you ask? Is it just a college frat bro home for summer break making a few bucks by serving the cougars of the neighborhood a Bloody Mary by the pool? Is it the name of a sophisticated football team Waterboy? All of this sounds right, but all of this is wrong.

The BeverageBoy, whose name has been changed to BevBoy since appearing on Shark Tank, essentially makes it easier to drink your beverage of choice while in water. That might actually come in handy for the sharks, in case the person they've hired to hold their champagne glass isn't available during their nightly soak in the tub.

Take a look at these key facts about the BevBoy, and see if your semi-aquatic lifestyle is in need of one too.

1. The BevBoy Is Just A Fancy Koozie

You know those cheap koozies car dealerships always give out for free that you can't wait to toss once you find a trash can? Well, those are actually supposed to be used to keep your beverage can cool. The BevBoy is basically a koozie with a weighted propylene arm extension that keeps your drink balanced and upright in water. You can even leave it in the water as you go for a surf, apparently. With the BevBoy, you can sip the lazy days of summer away.

2. If the BevBoy Floats Your Boat, You Can Buy It Now

3. The Mascot Is Sort Of Cute, But Mostly Creepy

Surprisingly, the mascot for the BevBoy is not, in fact, a boy. It's a river otter, an American river otter superhero, to be precise. It looks like that means the river otter is just slightly anthropomorphized with some nice aviators, but what he lacks in superpowers he seems to make up in patriotism.

4. Not All BevBoys are the Same

Though the blue-and-white BevBoy with the company's mascot is the standard edition, it looks like BevBoy sometimes makes special requests for the can cooler portion of the tool. Last August, the company posted the above special edition "Reggae on the River BevBoy," featuring a green Rastafarian lion symbol. I really hope that means BevBoy has started to do custom orders or is at least thinking about changing its design.

More importantly, does this mean each shark will get his or her very own BevBoy? Let's hope so.