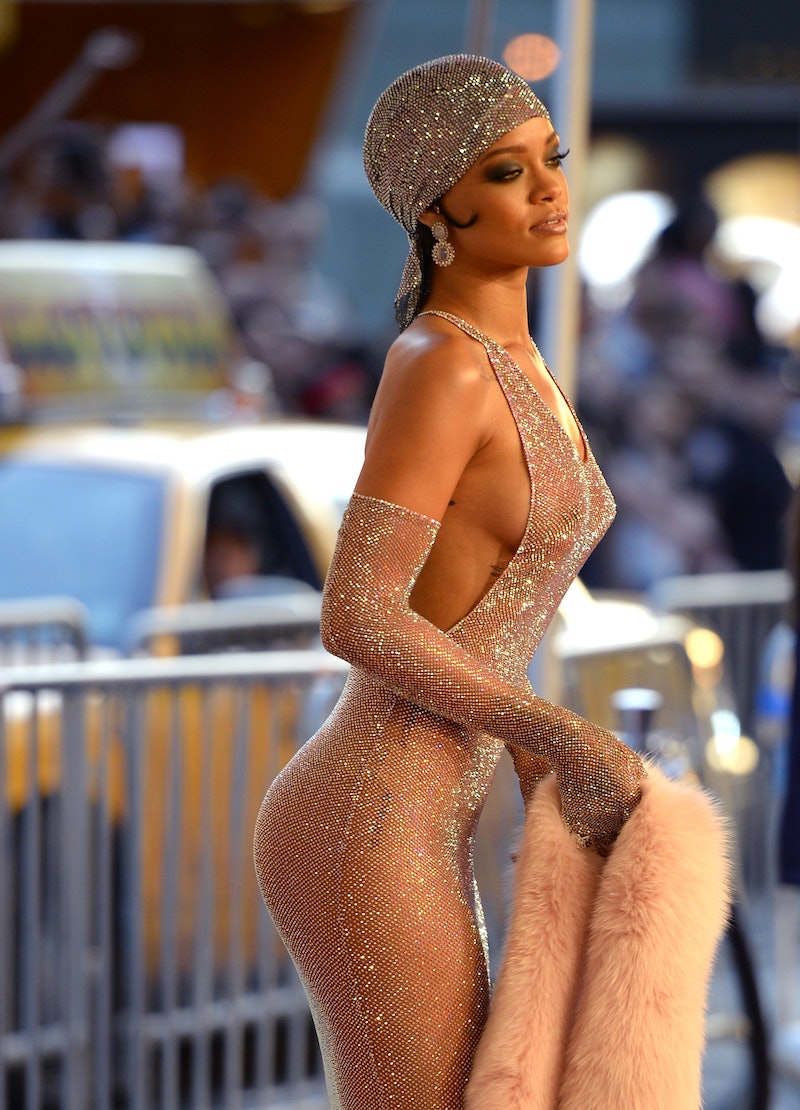 Rihanna is certainly daring when it comes to fashion. She has done some crazy things, like donning high-fashion pasties or going completely topless on a mag cover (showing off pierced nipples and temporarily breaking up with Instagram because of it). But for her March 2015 Harper's Bazaar cover shoot, Rihanna swam with sharks. The "FourFiveSeconds" singer took things to the very limits of sanity for this shoot.

Only Rihanna could pull of accessorizing with the cast of Jaws for a magazine. While models and starlets have posed and performed with snakes— Hi, Brit Brit! — RiRi's dalliance with the most feared creature of the sea is almost hard to watch. She is certainly putting herself near the (literal) mouth of danger to model some swimsuits.

In this minute-long, behind-the-scenes clip, you can actually see the palpable fear on her face as she peers underwater and sees the often terror-inducing creatures. There’s no dialogue, just the sound of water. Talk about creating an atmosphere. Footage of Rihanna posing seductively in her sparkly, metallic, and wide-legged jumpsuit is juxtaposed with images of the prowling shark. It's almost as if it’s stalking her. It’s super suggestive...but we know who will emerge the victor! RiRi, of course!

Watch the video below...if you dare.

Okay, okay. You can pull your hands away from your face and stop peeking through your fingers so you can look at the cover, which Rihanna shared on Instagram.

Don't you love how her underboob tattoo feels like an accessory? Are you ready for more shark swimming?

Applause, applause! Rihanna is a gutsy gal. All in the name of fashion.

Here are four other times that starlets have taken risks in the name of looking cool!

Now that's what I call a necklace...and a performance partner! Brit's slithery, albino pal was sort of cute. Sort of.

2. Rihanna And Those Pasties

Those pasties that RiRi wore last year were almost bare-all. Almost. It was dangerous simply because one wrong move and...you know what happens.

3. Joan Smalls, A Trapeze, And The Sea

Model Joan Smalls gave new meaning to the word athletic while playing on a trapeze over the wide-open sea for Chanel.

Clearly, fashion is a way more dangerous business than you might think!