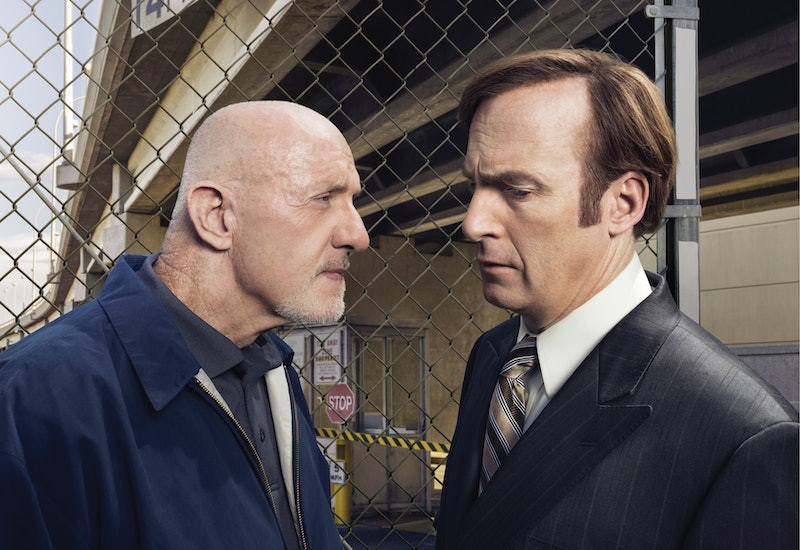 "You don't want a Criminal Lawyer," Jesse Pinkman told Walter White after a setback on Breaking Bad. "You want a criminal lawyer." Enter Saul Goodman, played by Bob Odenkirk, the slick, TV lawyer — with U.S. Constitution wallpaper lining the wall behind his desk — willing to launder money for drug dealers, talk meth-cookers down from the ledge, and dole out some sane/insane advice that's usually not heeded. Saul Goodman is such an oversize personality, it makes sense that he'd be the star of the Breaking Bad spin-off. And prequels are so hot right now — just look at the upcoming second season of Fargo — that it seems inevitable that his spin-off would go back in time. But, when it debuts on AMC on Feb. 8 (part of a two-night premiere event), when will Better Call Saul take place and how will it link up with Breaking Bad's timeline?

As it turns out, setting the timeline wasn't an easy task for the show's creators. “We were surprised by how little we knew about Saul,” Tom Schnauz, co-executive producer, told Wired. “We hadn’t ever thought about his backstory.” Well, we'll certainly know more now — including how he met Breaking Bad favorite Mike Ehrmantraut (who has one of the best names in a cast full of good names). So, what did Vince Gilligan and crew settle on?

According to a press release by AMC, Better Call Saul takes place six years before Saul Goodman meets Walter White on Breaking Bad. (Minor spoilers follow). "When we meet him, the man who will become Saul Goodman is known as Jimmy McGill, a small-time lawyer searching for his destiny and hustling to make ends meet," the release says. "The series will track Jimmy's transformation into a man who puts the 'criminal' in 'criminal lawyer.'”

Six years B.W.W. (before Walter White) is a very savvy, calculated time. It's not so long ago that Odenkirk would look too ridiculously old to still be playing Saul. (Still, it's not six years ago from today, it's six years from when Saul met Walter — whenever that was.) This isn't Saul in his '20s (though that might be awesome, and maybe should be the subject of another prequel comic book). You just add a little more hair, layer on the pancake makeup, and, voila! Young(ish) Saul.

Then again, just because the show starts off six years before the Goodman/White meeting doesn't mean that it has to stay there. "Executive producer Peter Gould says that the show will feature scenes that move back and forth over several decades, including the era where Walter White cooked and sold crystal meth," the New York Daily News reports.

“One of the great things about having a timeline which is flexible is that perhaps some of it takes place before Breaking Bad, during Breaking Bad, and after Breaking Bad," Gould told the paper. "That gives us the ability to bring back characters that were killed on Breaking Bad."

Or maybe some characters who weren't killed? I'd give anything to see Badger and Skinny Pete jam in a music store again.