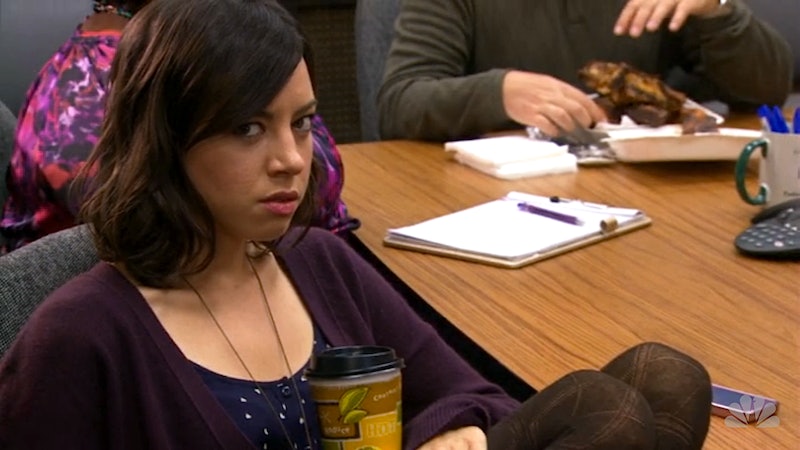 It's hard not to become at least somewhat more cynical as you get older. At some point, you've...seen some stuff. Your belief in the goodness of people/humanity/the world becomes eroded over time, because of the horrible sorts of things you see happening sometimes. Things start to seem farcical and ridiculous, and you question more than you did when you were a younger person. It's not necessarily a bad thing; becoming more cynical means that you stop accepting things on face value and start approaching things with more caution. You're only in trouble when not even puppies can't make you smile. Everything leading up to that is probably just common sense.

Cynicism can sneak up on you, but it's important to acknowledge lest it turn you into a completely bitter old hag. You still want to keep a little joy in your life, so recognizing where you're being cynical is important for making sure you don't become cynical about every little thing. You know, sometimes the person at the checkout counter is saying "have a nice day" because they're polite, not because they have some hidden corporate agenda to make you spend more. Here are 11 ways you know you've reached the point in your life where cynicism is starting to set in:

1. You start identifying with April more than Leslie

Everyone wants to be like Leslie Knope, with her infinite energy and optimism. However, if there comes a day when you start to feel a liiiiiitle perturbed by Leslie's incessantness, and more understanding of April Ludgate's eye-rolling annoyance, then you're might be sliding toward cynicism.

2. Your main speaking/texting tone is sarcastic

If every time you answer a question with sarcasm rather than patience or sincerity, then cynicism is your new best friend. Super cynical people have trouble taking anything seriously, and sarcasm is the native language of cynicism.

3. You start loathing cute photos posted by your Friends on social media

Babies, relationship milestones, kittens, puppies, military families being reunited... You name it, if it's cute and posted to social media, it makes you want to hurl. That's because your once-warm heart is now a blackened husk, you horrible cynic. Who doesn't think their cousin's 1,000 puppy pictures aren't ADORABLE? No one, that's who.

4. You think people hitting on you or complimenting you is lame and probably fake anyway

Whenever you receive a compliment from pretty much anyone, you just roll your eyes. Things you once thought were cute and romantic are now just overused platitudes designed to achieve nothing more but getting you naked. Sometimes, that's true! That is what people are trying to do sometimes! But it's important to remember that there's sincerity in flattery too, and it's fairly easy to distinguish a compliment given for an ulterior motive to one given out of honesty.

It probably pays to be cynical with the media. You hate celebrity interviews because you know they're all scripted and just meant to make you fall in love with a false idea of someone you'll never know in real life so you'll go buy tickets to their movies and subject yourself to corporate ads while watching their dumb TV shows. NO THANK YOU PLEASE. While it's important to question the cult of celebrity, sometimes the fluff and filler can be a nice way to switch your brain off. Just because a late night "interview" is scripted, it doesn't mean there still aren't funny or endearing parts. Celebrity is all based on fabrication anyway, so what did you really expect?

6. You question the news

Again, it's always important to question what you read in the media. There's a reason why certain stories are given priority over others, and everything—even things that claim not to be—is reported with some kind of bias. But by the same token, not everything is some giant media conspiracy or government cover up. Bigoted, aimed at causing distraction, politically leaning? Sure. But that doesn't mean it's all rubbish, so try and take everything with a grain of salt—but only a grain.

7. You're always convinced people want something from you

The minute someone is nice to you, you immediately start wondering what they want out of you. You've stopped feeling like people are nice just to be nice, because you've seen too many people be nice simply for selfish reasons. Being aware that people can be self-serving and duplicitous is important, because people most certainly can be. But it's important not to push away someone who is kind to you in earnestness simply because you don't believe anyone is capable of being genuine. Some people are, and some people are not. Be a cynic, but don't tar everyone with the same brush.

8. You're seriously questioning your belief in "happily ever after"

Maybe when you were younger you believed that love was all you needed, and that it could last forever. One or more heartbreaks in, you're starting to revaluate the whole "happily ever after" thing. You're starting to think that everything has to end at some point. Like everything else, maybe love does—but maybe it doesn't. You don't know the future, and you can't control it. But you can control your attitude towards it.

9. You're not even sure about political correctness any more

Once upon a time, you would stand on your soap box and fight anyone with an even slightly bigoted or offensive opinion. Now you're starting to think, "Well, if they're not hurting anyone, and they just go about their business believing something different to me, do I really even care?" Of course, you're still anguished about unjust opinions that manifest physically in society, but you can't help but think that if someone has a stupid opinion and doesn't hurt anyone by having it, then maybe you don't need to be as mad about it as you used to be.

10. You don't romanticize your life

Oh, to be 16 again and have it all planned out to perfection! As you experience more and more, you realize life doesn't always go to plan. That's good to know: Things sometimes go haywire, and there's nothing you can do to help it, so you just have to accept it. That doesn't mean you shouldn't get excited about or build up your future plans. Blending a healthy dose of cynicism with your dreams can keep you realistic in your expectations and priorities, but retaining optimism will, in your day-to-day life, make you a happier person.

11. You're always prepared for the worst

No longer do you face every situation in life thinking, "This will work out—it just has to!" When you start to become cynical, you're always expecting the worst. The benefit of that is you'll always be pleasantly surprised when things do go well, but the problem is for extreme cynicism, you'll begin to pick successes apart. Obviously, don't be naive and think everything will be perfect, but try not to expect all doom and gloom either. Cynicism is a helpful trait to have, just so long as it's measured with some kind of weird ecstatic joy from time to time.