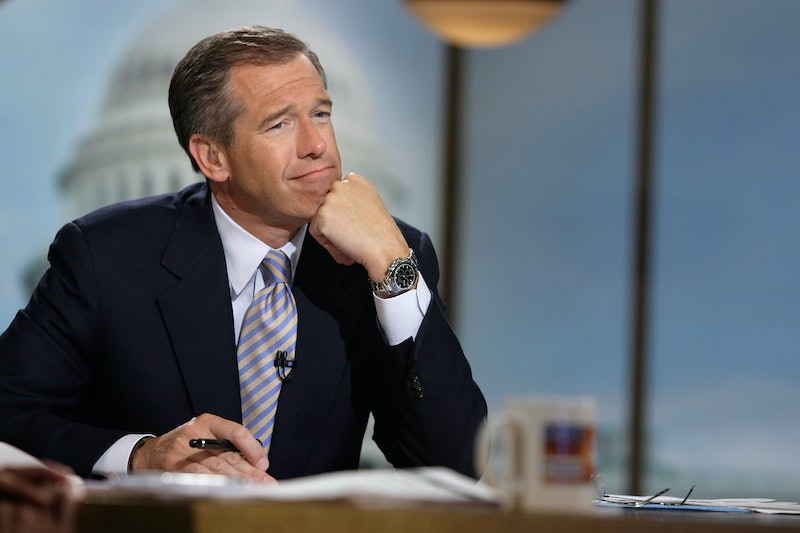 At the core of a journalist's code of ethics is truthfulness and accuracy, two principles that NBC's Brian Williams has apparently violated. On Wednesday night, Williams apologized for embellishing an Iraq War story, which involved him riding in an aircraft that was hit by RPG fire, a story detail that he now admits did not happen. The admission comes after Williams retold the story last Friday at a veterans' event, prompting U.S. soldiers involved in the Iraq War to come forward and reveal what actually happened.

Last Friday, NBC paid tribute to U.S. military vet Command Sgt. Maj. Timothy Terpak at a New York Rangers game, an event that Williams anchored. During the event, Williams once again took the opportunity to tell his story, in which he was riding in the 159th Aviation Regiment’s Chinook in 2003 during the Iraq War when it was hit by RPG fire. He recounted:

The story actually started with a terrible moment a dozen years back during the invasion of Iraq when the helicopter we were traveling in was forced down after being hit by an RPG. Our traveling NBC News team was rescued, surrounded, and kept alive by an armor mechanized platoon from the U.S. Army 3rd Infantry.

Except that's not what happened, according to crew members of the 159th Aviation Regiment who were actually on the aircraft in question. According to the soldiers, Williams and his news team were actually on a Chinook that came an hour after the three helicopters were downed. When they approached the military's Stars and Stripes with the real story, the newspaper confronted Williams, who then came clean.

On Wednesday night, Williams made a 60-second televised apology in which he said:

I made a mistake in recalling the events of 12 years ago.... I want to apologize. I said I was traveling in an aircraft that was hit by RPG [rocket-propelled grenade] fire. I was instead in a following aircraft.

There are a few issues with Williams' apology. First of all, his wording makes it seem like Friday was the first time he was telling this story and it was difficult to remember the details from 12 years ago, when in fact he's been telling the invented story for years. Before Friday's Nightly News tribute, Williams had told the same story to David Letterman in 2013. And before that, he had told and retold the story numerous times, each time with varying details.

Another issue is that he does not clarify that the "following aircraft" he was in came an hour after the RPG fire. It could easily be interpreted that he was following close behind, and therefore still in the middle of the action and danger. When NBC's initial report of the helicopter incident came out on March 26, 2003, Don Helus, the pilot who had been flying the downed Chinook asked Williams' producer to retract the story since it was blatantly false. He never got a response. Helus told the Omaha World-Herald:

That’s why I was in shock that he made that claim. They had no damage, and they didn’t take fire.... My crew was a little upset about that — somebody trying to make a claim to inflate their career.

That career might now be forever tainted. For a journalist of his caliber to make such a drastic embellishment could do insurmountable damage to his reputation. The first step of dismantling such a reputation? Memes. And oh how they've started rolling in.

The hashtag #BrianWilliamsMisremembers is currently taking Twitter by storm, generating all kinds of epic stories the NBC anchor could lie about next.