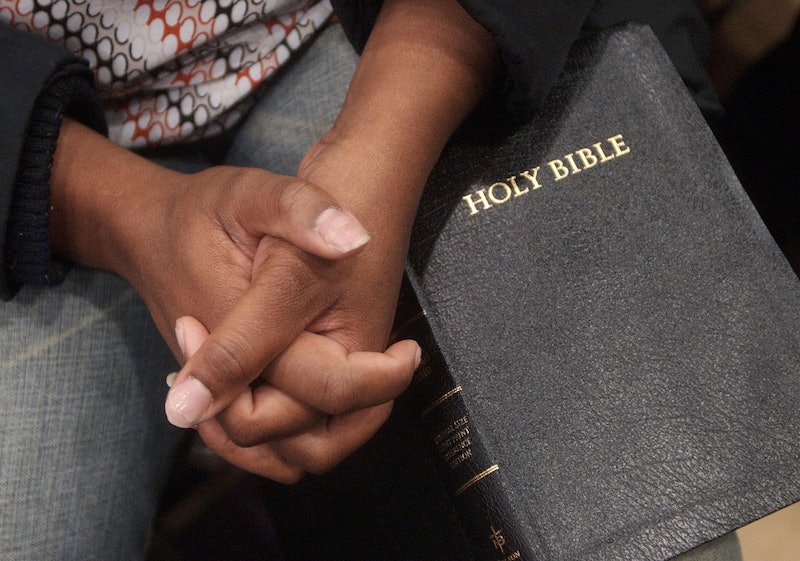 Despite what some people think, there are feminist moments in the Bible, but the book as a whole still isn't that great when it comes to representing women. According to new analysis by Episcopalian priest Rev. Lindsay Hardin Freeman, women's speech only accounts for 1.1 percent of the Bible. Which is so bad it makes Hollywood actually look good at female representation, and that is a feat.

In order to come up with this number, Rev. Lindsay Hardin Freeman carefully went through the Bible (using the New Revised Standard Version), and counted all of the words spoken by women in the Bible.

"I wanted to know what women in the Bible really said," Freeman told The Huffington Post. "I was stunned to see that nobody had done this before." So she and three other women in her church community got to work with highlighters, sticky notes, and spreadsheets to find out just how many women have speaking roles in the bestselling book of all time.

The results? Well, it turns out the Bible contains 93 women who speak, 49 of whom are named. Collectively they say a total of 14,056 words, which accounts for roughly 1.1 percent of the total words in the Christian Bible. And while the women didn't tally up the total number of words spoken by men (most of the Bible is narration after all), it's fairly obvious that men speak more than one percent of the time. For instance, Freeman and her team found that in Genesis, only 11 women speak compared to 50 men.

It seems rather remarkable, considering that people have been analyzing and studying the Bible for the better part of two millennia — considering, in fact, that Biblical studies was once one of the most important fields of scholarship in medieval Europe — that this is the first time a project of this nature has been conducted. People actually used the Bible to search for codes that could reveal the future before bothering to count up how many women speak. It's kind of mind boggling.

Also mind boggling? The woman with the most spoken parts in the entire Bible seems to be the Virgin Mary, who only says a total of 191 words. Wow.

It isn't overly surprising that the Bible is so lacking in women's speaking parts; after all, it was written down by men and was doubtlessly informed by the patriarchal culture of the time. For its time period, it had some fairly progressive things to say about women — particularly in the New Testament — but unfortunately it's still pretty light on women speaking for themselves.

Still Freeman says that doing the project and uncovering so many women whose speech has been recorded was a beautiful experience.

She also wrote a book about her findings, entitled Bible Women: All Their Words and Why They Matter.