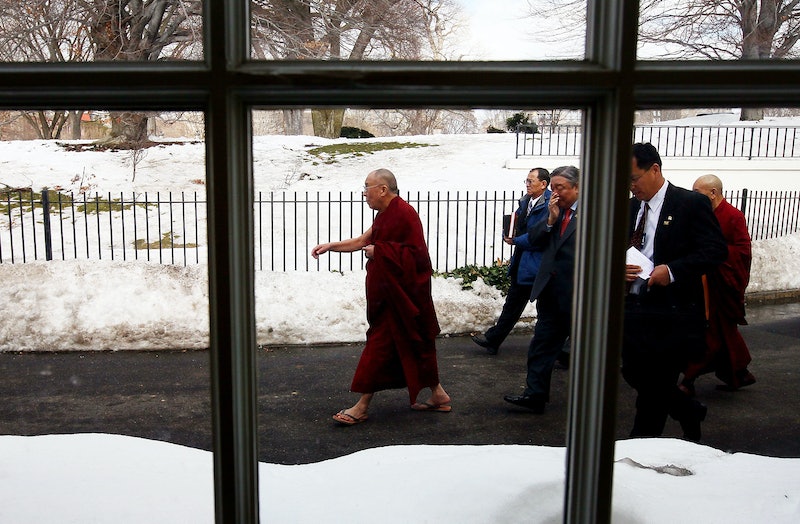 At this year's National Prayer Breakfast on Thursday, international politics came into play as President Obama called the Dalai Lama a "good friend" in his speech — an affectionate acknowledgment, despite the two having avoided a direct meeting at the event that was closely watched by a disapproving Beijing.

Speaking before an audience of 3,000, Obama praised his fellow Nobel Peace Prize laureate, whom China accuses of plotting to separate Tibet from the "motherland." The President said:

I want to offer a special welcome to a good friend, His Holiness the Dalai Lama — who is a powerful example of what it means to practice compassion, who inspires us to speak up for the freedom and dignity of all human beings. I’ve been pleased to welcome him to the White House on many occasions, and we’re grateful that he’s able to join us here today.

It's not the two's first meeting — they've met privately at the White House before — but it is their first public encounter. Though neither of them went through the official courtesy of shaking hands or slapping backs with each other (is one allowed to slap the Dalai Lama's back? Or the POTUS', for that matter?), Obama nodded and smiled at the Tibetan spiritual leader, and clasped his hands together in a bow-like gesture as the event began.

Despite the lack of official greeting, senior White House advisor Valerie Jarrett sat at the Dalai Lama's table, signalling the administration's support for his presence, reported The Guardian. Obama's acknowledgement of the Dalai Lama is likely to rile Beijing, who had voiced its opposition to meetings between the Buddhist monk and world leaders after the White House announced that Obama would speak at the event. Reuters reported its Foreign Ministry spokesman Hong Lei saying:

China is opposed to any nation or government using the Tibet issue to interfere in China's domestic affairs, and opposed to any country's leader meeting with the Dalai Lama in any manner.

Obama's praise was a brief, warm recognition of the Tibetan leader before the President delved into more serious topics, including condemning ISIS and distorted religious ideology. He said:

From a school in Pakistan to the streets of Paris, we have seen violence and terror perpetrated by those who profess to stand up for faith, their faith, professed to stand up for Islam, but, in fact, are betraying it. We see [ISIS], a brutal, vicious death cult that, in the name of religion, carries out unspeakable acts of barbarism...

[T[his is not unique to one group or one religion. There is a tendency in us, a sinful tendency that can pervert and distort our faith.

Interestingly, the President also called for the separation of religion and government (Attn: Evangelicals, Tea-Partiers). He stressed the need to:

[U]phold the distinction between our faith and our governments. Between church and between state. The United States is one of the most religious countries in the world — far more religious than most Western developed countries. And one of the reasons is that our founders wisely embraced the separation of church and state. Our government does not sponsor a religion, nor does it pressure anyone to practice a particular faith, or any faith at all. And the result is a culture where people of all backgrounds and beliefs can freely and proudly worship, without fear, or coercion.

Obama also mentioned in his speech that he was looking forward to the visit of another religious leader, Pope Francis, later this year — a meeting that, unlike the Dalai Lama's, would not have to be behind closed doors to avoid risking China's wrath.