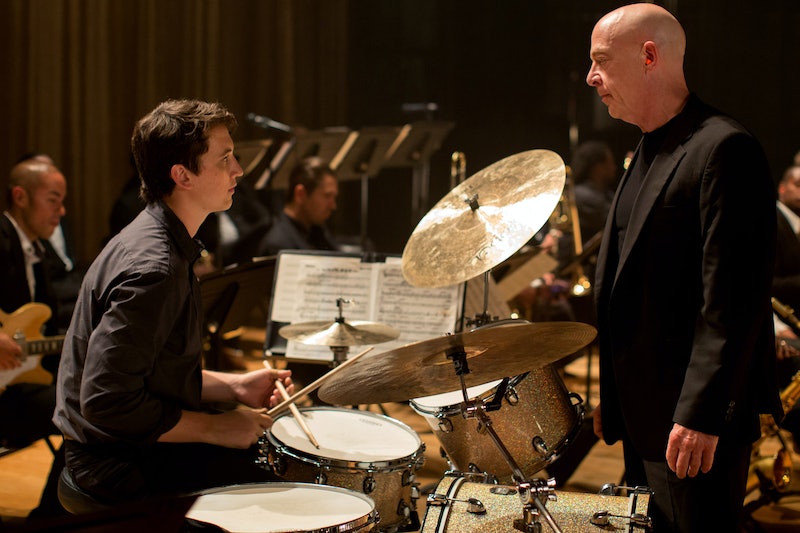 If you've been keeping up with the movies that have received a ton of Oscar buzz this awards season, you've probably already seen Whiplash. Starring Miles Teller, the movie has received five nominations, including Best Picture, and tells the story of a young jazz musician and his volatile teacher, played by J.K. Simmons, when he starts taking classes at a competitive music conservatory. And although the film explores the most extreme version of a relationship between musician and teacher, it certainly hits close to home for many musicians who see the movie and can identify with Andrew, the main character. What helped make the movie seem so real? As it turns out, while Whiplash isn't based on a true story, but it is inspired by the experiences of director Damien Chazelle as a drummer.

Chazelle himself is a pretty impressive guy. At just 30 years old, his movie is a solid Oscars contender. And before this, Chazelle was a musician, too, just like Andrew in the movie. Admittedly, his experience with his teachers (who he compares to sports coaches) wasn't quite as intense, but the emotions that are conveyed on screen are absolutely real. When he was a jazz drummer himself, he threw himself into his music, and it ended up consuming his life, as Chazelle told the Los Angeles Times:

I was a jazz drummer, and it was my life for a while, what I lived and breathed every day. It started out, as these things often do, as kind of a hobby and fun and enjoyable and self-expression — all that artistic stuff. And then it became like boot camp. It became like going every day up for execution, and wondering if you were going to get a stay of execution.

Um, this is making me glad I never took up an instrument, but the experience obviously served Chazelle well if he was able to take it and turn it into a highly acclaimed and successful film, right? And what's even more interesting? He obtained the licensing for two of his favorite charts that he played as a drummer and made them the central focus in the movie, according to what Chazelle told Filmmaker Magazine.

The two central charts in the movie, "Whiplash" and "Caravan," were preexisting charts that I played as a drummer and meant a lot to me as a musician. We licensed those. Then it just became a matter of building out the rest of the musical soundscape. Everything else was composed originally for the movie. It was all in that style — big, aggressive, big band jazz. I think there’s enough movies about cool, soft, laid-back jazz. I wanted this to be about the other side of the music.

And it's a good thing he did.