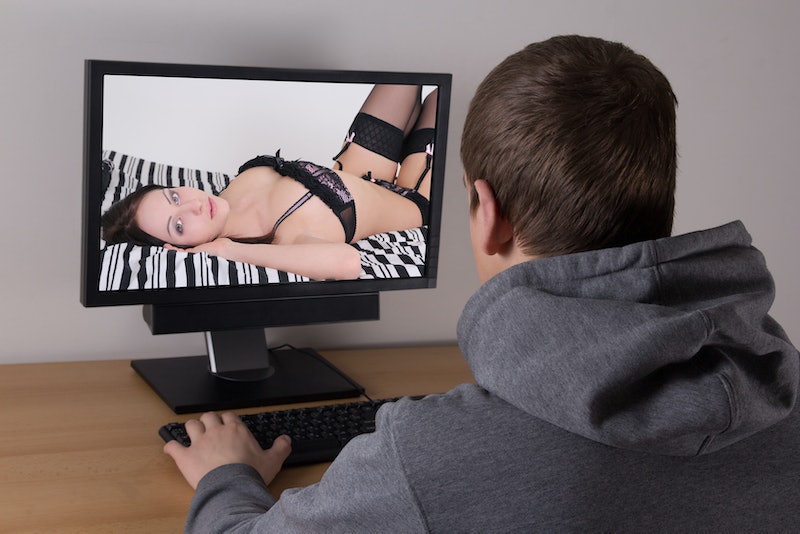 It's no secret that Americans aren't huge fans of comprehensive sex education, but apparently our British peers aren't so great at it either. According to a recent survey from the National Union of Students (NUS), more than half of U.K. students rely on porn for their sex education, because they don't feel like they're getting enough information from schools. Even though three quarters of the respondents reported that they realize porn has "unrealistic expectations," this means that 60 percent of students feel they have nowhere else to turn to for information about sex. If that doesn't say something about the state of sex education, I don't know what does. Instead of covering the important stuff like, say, consent, students report that their classes were mostly treated as biology lessons, the Daily Dot reports. Only one-third of students were taught about consent at all, in fact, and according to the NUS, "not even a fifth discussed LGBT [topics]." Even the basic topic of relationships was covered in less than half of classes. The Daily Dot points out that the U.K. government advises Internet providers to filter "inappropriate" content, which ironically has ended up blocking sex education websites such as the the teen-oriented BishUK. (They also blocked the homepage of one of the politicians who campaigned for the filters, which will never cease to amuse me.) NUS Vice President Colum McGuire sums up the situation best on the their website:

"People are being left with gaps in their education... Inadequate SRE puts young people at risk. I find it alarming that sexual partners are listed as a top SRE source by our respondents. Consider this in light of the fact that consent was never even raised for two thirds of respondents."

Currently, the NUS is lobbying for better sex and relationship education in U.K. schools. Considering porn's fraught history with the objectification and degradation of women as well as the ease with which it can be accessed now, it's clear that something needs to change in order to better educate students. Otherwise, we'll be faced with a generation of young people whose expectations for sex are founded on pornography, and I can't think of anything much scarier for women.