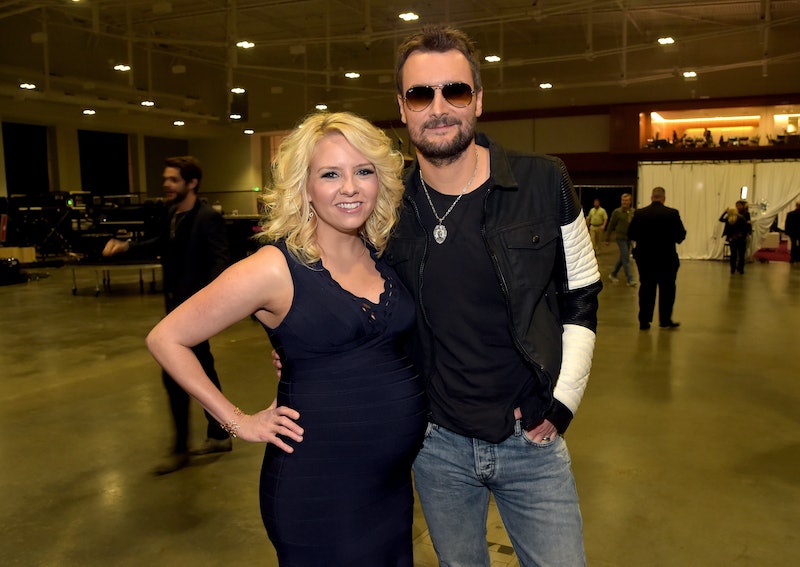 Eric Church is mostly known for his catchy country tunes and all-American man image. But the Grammy-nominated country star is also known for being part of a happy marriage. Church has been married to his wife Katherine Blasingame since 2008. They have one son together, with another baby on the way. It's even possible that she could go into labor at the awards show! So as music's big night approaches, some fans might be wondering more about Church's leading lady in his life, and what she is all about.

As it turns out, Blasingame is part of the country music business, too. She isn't a singer or songwriter, though. Instead, she works for a music publishing company that pitches songs to country artists. According to Church, she was actually in the music business before he was. After all, they met because she was trying to connect him with one of the writers who she represented at her company. So, of course, they probably had tons to talk about in terms of bonding over music.

The couple tied the knot seven years ago in Church's home state of North Carolina, where he performed a song he wrote for her! Aww. But don't think that Blasingame has put her skill set to the side just because she's married to someone more famous than she is. In fact, Church said in an interview with Taste of Country that Blasingame still uses her work to help him out with his music!

It’s great now, because being a publisher and being somebody in the industry, I can bounce songs off of her and she has the knowledge, you know, to be kind of that sounding board of what I should cut and what I shouldn’t cut. So, she’s one of those in the inner circle that I run a lot of stuff by.

So it looks like not only is Blasingame still dedicated to the country music business, she also puts her knowledge to good use in deciding what types of country sounds will sell to fans and what notes should be taken to the cutting board. Good for her!

And as we know, she is also expected to give birth very soon (about a week after the Grammy's), but it looks like she is still determined to attend the award show with her husband. Church said that he is working on flying her out just for that day so that she can be there to support her man. Now that's dedication!

“That will be an interesting night for all of us," he said. Indeed! Keep your eyes peeled for them on the red carpet this weekend.