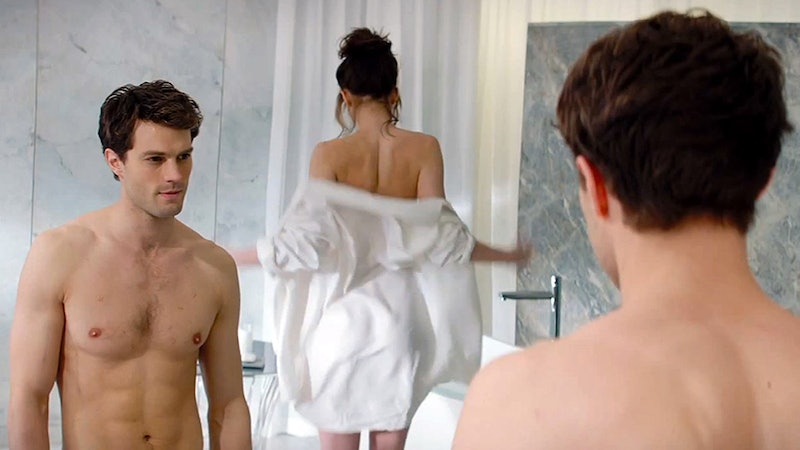 As we inch closer to the highly-anticipated release of E.L. James' Fifty Shades of Grey adaptation, we are left wondering what will be included in the on-screen version. We know the film received an R rating. We know the infamous tampon scene didn't make the cut ("It wasn't even discussed," said Director Sam Taylor-Johnson). We know Ana's point of view is less important to the film that it is to the book. And we know, against our highest hopes, that we won't be seeing Jamie Dornan's Christian Jr. It's a huge — or perhaps tiny, we'll never know — bummer.

But even E.L. James told Variety that expectations were too high in terms of mirroring the sex scenes exactly. "'I’m pretty sure the millions of fans who have the read the trilogy will think there is enough sex.” But will the millions of fans, some who can recite the book backwards and forwards, feel accuracy was taken into account when adopting dialogue and narration? We sure hope so, because there are certainly passages from the novels that are so funny, so cleverly crafted with wit and humor, it would be a shame to cut them from the film's sexy landscape. Because even a film starring two gorgeous A-list actors having constant sexcapades needs a bit of humorous levity every now and again. Here's 18 quotes we hope they include in the film.

"I can almost hear his sphinx-like smile through the phone." Do sphinxes... smile?

“He’s my very own Christian Grey flavor Popsicle.” So, flesh-y?

Some fantasies are more arousing than others: "I imagine him as an old-time movie director wearing jodhpurs, holding an old-fashioned megaphone and a riding crop."

We LOVE CHEESE: “Why is anyone the way they are? That’s kind of hard to answer. Why do some people like cheese and other people hate it? Do you like cheese?”

Versatility is key: “Christian squirts baby oil onto his hand and then rubs my behind with careful tenderness – from makeup remover to soothing balm for a spanked ass, who would have thought it was such a versatile liquid.”

"His voice is warm and husky like dark melted chocolate fudge caramel... or something." OR SOMETHING.

“I’m losing all sense of self, every atom of my being concentrating hard on that small, potent powerhouse at the apex of my thighs.” It's called a penis, Ana.

All boy scouts are actually just Christian Grey bondage enthusiasts in training: “Some boy scout he must have been to learn these knots.”

"...my subconscious - she's doing her happy dance in a bright red hula skirt at the thought of being his." ...Fingers crossed Ana's the only one who can see her.

"I feel the color in my cheeks rising again. I must be the color of The Communist Manifesto." ¯\_(ツ)_/¯American Beauty really started something: "He smiles, then strides with renewed purpose out of the store, slinging the plastic bag over his shoulder, leaving me a quivering mass of raging female hormones."

“My inner goddess sits in the lotus position looking serene except for the sly, self-congratulatory smile on her face.”

“My inner goddess jumps up and down with cheer-leading pom-poms shouting yes at me.”

“My inner goddess looks like someone snatched her ice cream.”

And is apparently a huge, judgmental prude: “My subconscious purses her lips and mouths the word ‘ho.’ I ignore her.”

“Sitting beside me, he gently pulls my sweatpants down again. Up and down like whores’ drawers, my subconscious remarks bitterly. In my head, I tell her where to go.”

Fifty Shades of Grey hits theatres this Valentine's Day (but you already knew that). See the trailer below: