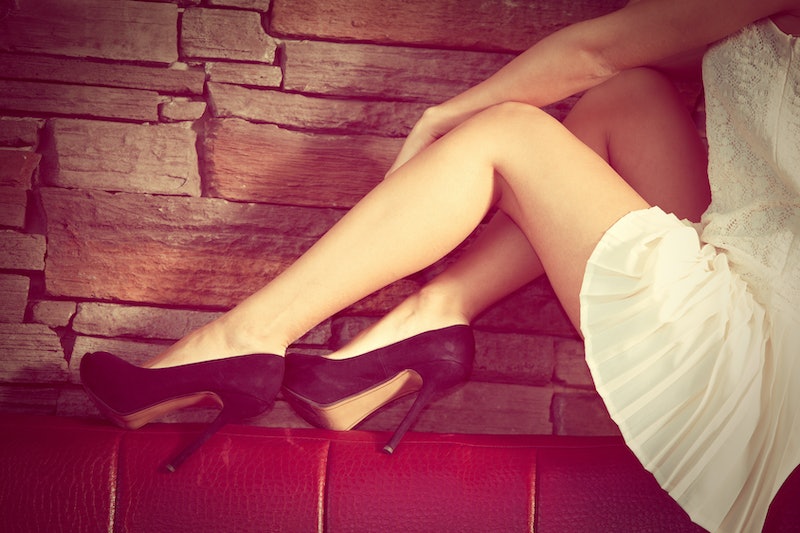 After a fun night out with my girlfriends, we all come back relieved to take off our heels. Our feet are sore, tender, covered in blisters and sometimes an occasional battle wound from an embarrassing fall. It baffles me when some women I talk to tell me that their heels are super comfortable and that they can even run in them! I have flat feet, so I like to blame them for the reason as to why I suck at wearing high heels (who knows, maybe heels are somewhat durable for those with properly arched feet?). Don’t get me wrong: I still like to wear them from time to time. After all, they accentuate my legs and make me taller, so it’s like real life Photoshop but slightly less unethical.

But no matter how comfortable you think your heels may or may not be, there are underlying health issues that will arise with time, such as back problems, knee strains, muscle spasms, and ingrown toenails. So why do women put up with these stilettoed snobs? Is it a power move to feel equal with men? Is it purely the illusion of making their legs look longer? High heels have been around since the 1500s, so what’s the deal?

High heels were first worn by Persian horseback warriors in the 16th century. The heels were reported to help them latch their feet onto the stirrups. Eventually, high heels became a symbol of wealth — because rich men wanted to look taller, of course

Around the 1600s, women started wearing heels as a way of showing their equality — so maybe this is where the power factor comes into play (a misplaced sense of equality from over 400 years ago).

Eventually, this high fashion shoe became available for the lower class and the wealthy responded by wearing even higher heels to differentiate themselves from the poor. Women’s heels were thinner whilst men’s heels were thicker, but one day dudes stopped wearing heels altogether to make themselves separate from women. So basically, men were too hipster and couldn't bear to keep the trend alive once women and the poor started to experiment with it. Come the 17th century, heels began to die out because they were deemed an impractical style, and considered to embody women’s irrationality and superficiality (the irony of the fact that the trend began with men is not lost on me).

With the invention of photography centuries later came pinup girls — just in time for WWII. High heels made a comeback for pinup girls to wear during their photo shoots (they were easy to wear for a short duration and looked nice in pictures). The soldiers took these photos to battle and cherished them so much that when the war was over, stilettos were invented. So another theory is that photography brought erotica and fashion together, making high heels appear sexy.

Carine Roitfeld, former Editor-in-Chief of Vogue Paris, once said, “Always wear high heels. Yes, they give you power. You move differently, sit differently and even speak differently.” Really, Carine? The power seems to be more of a mentality: Heels make you taller, and therefore, perhaps, allow you to feel more powerful. But as cliché as this is going to sound, shouldn’t the power come from within instead of from your four-inch stilettos? I mean, of course you’ll move and sit differently when you have stilts attached to your feet. But there seems to be some sort of shame associated with not being able to wear heels and I know women who rave about how comfortable their heels are as bragging rights. But are they, really? Or are these ladies just trying to avoid the weird social shame that comes with not wearing heels (maybe it’s a social class issue derived from the 1600s)?

More like this
The Best Heels For Bunions, According To A Podiatrist
By Margeaux Baulch Klein and Maria Cassano
Here Are All 703 Outfits Rachel Wore On Friends
By Kat George
Introducing Beauty Beat, The UK’s First Luxury Beauty Event For Women Of Colour
By Justine Knight
Dua Lipa On YSL Beauty, Plus Her Fearless Approach To Hair & Makeup
By Erin Stovall
Get Even More From Bustle — Sign Up For The Newsletter