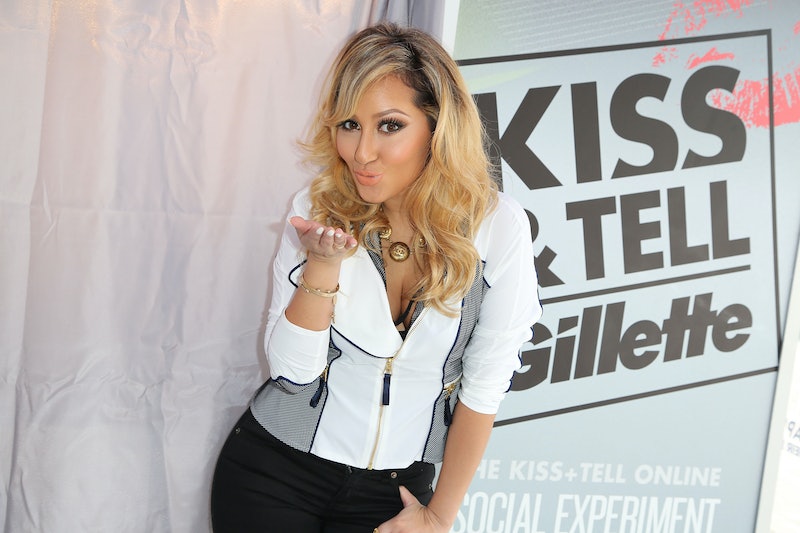 Congratulations are in order for a former Cheetah Girl! The Real host Adrienne Bailon just confirmed that she is engaged to her longtime boyfriend Lenny Santiago, and she did it in the slyest way possible. Adrienne Bailon took to her talk show to break the news about her engagement, and, though the episode airs on Monday, E! News got the sneak peek — and it looks like this is the real deal! The clip from E! shows Bailon's co-hosts of the show Loni Love, Jeannie Mai, Tamar Braxton, and Tamera Mowry discussing the daily tabloid fodder, when Bailon chimes in to tell them that there is one piece of news not yet in the magazines. Why? Because no one knows yet! She then shows off a sparkly engagement ring on her finger, courtesy of her future husband Lenny Santiago.

So who is Santiago? Well, for nearly six years, he's been Bailon's boyfriend. Bailon opened up to Latina Magazine in July of 2014 to discuss her love life, though she admits that she's more private now than she ever has been after her relationship with ex-boyfriend Rob Kardashian disintegrated:

I wanted to let people know that we’re not a secret—we’re just private... Five years into our relationship, we’re no longer at the beginning—we’re established now. We’re in a great, strong place where any negativity cast our way won’t affect us.

She also told the magazine that she "can't wait" to get married and start a family.

But, who is it that she's now doing those things with? Though Santiago is well-known in the industry, he's far more "behind-the-scenes" than Bailon. According to E!, Santiago is VP of A&R, Artist Management at Roc Nation. He's also a photographer, though according to his Instagram page, it's a hobby, not a career.

Unlike Bailon, who is a natural in front of the camera, Santiago seemingly prefers to stay behind it — and in that way, they balance each other out. In fact, it's hard to find a picture of these two anywhere on the Internet, save for one recent pic on Bailon's Instagram coinciding with the engagement announcement. It's clear that privacy means a lot to this couple, and keeping their relationship out of the public eye seems to be working.