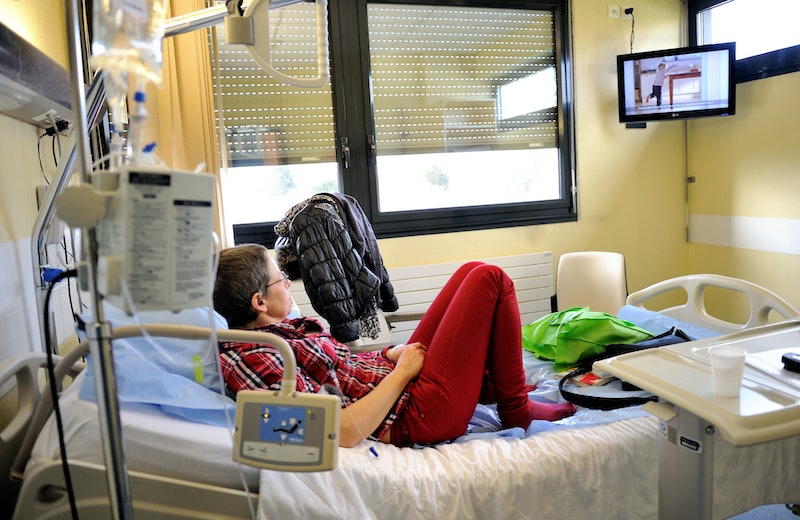 Missouri women seeking to end unwanted pregnancies might have just hit another brick wall in the fight for control over their own bodies. Under a proposed bill that is currently advancing through the Missouri House of Representatives, prospective abortion patients would be forced to watch a video about the dangers and potential complications of the procedure, many of which medical experts claim are misleading or false. After viewing the informational video, women would then be required to wait a full 72 hours, during which she would have the added option of obtaining an ultrasound appointment, before having the procedure performed at the state's only abortion clinic, a Planned Parenthood in St. Louis.

Critics of the proposed bill have already begun voicing concern, alleging that the video, which would be produced by the Missouri Department of Health and Senior Services, would be yet another way to shame and intimidate women seeking the procedure. State Representative Linda Black, who introduced the bill, maintains that the video is simply another alternative to the mandated written information already in place under the state's "informed consent" law, which is distributed to women prior to abortion procedures. Black calls the new video addition "a mere image of the printed form, but only in a narrative documentary form."

The "graphic video" in question would cover standard information as to the procedure itself, but would also cover topics such as "infection, hemorrhage, cervical tear or uterine perforation, harm to subsequent pregnancies or the ability to carry a subsequent child to term, and possible adverse psychological effects," in addition to abortion alternatives. Despite criticisms of its nature, Black insists that the video would assist the illiterate or those who have difficulty understanding written information.

Whether or not the bill succeeds in informing patients of their risks, it poses a threat to many of the already traumatized women looking to end their pregnancies, including rape and incest victims and victims of domestic abuse. Patients already face a harrowing obstacle course of protesters and potentially problematic misinformation (such as frightening footage containing false health facts or false clinics that lie to women and tell them they aren't pregnant, causing them to miss their window of opportunity). Putting them through the additional stress of the graphic footage could prove detrimental, with Planned Parenthood insisting that patient information should ideally "support a woman" and "enable her to take care of her health and well-being", without "shaming, coercing, or making a woman change her mind," as they believe the video would do.

The ugly face of the anti-abortion movement alone is enough to distress already emotionally shaken women. In an interview with Cosmopolitan, 28-year-old Brittany of Colorado shared her horrific brush with protesters outside of her local clinic:

I was the first appointment that day and noticed a few men, all in their 50s or 60s, milling around the parking lot when we pulled in. Once we got out of the car, one made a beeline for [my aunt and me] with a fistful of pamphlets. [One man was] screaming, "How can you do this? You're killing your baby to continue on your whore lifestyle, you jezebel!' Suddenly we were surrounded by five other men — that's when the baby-doll parts starting hitting us.

They had a box filled with torn apart baby dolls covered with red paint. All three of us were hit — in the head, chest, torso. As they were pelting us, they yelled, "This is what you're doing to your baby! Look at the street! It's strewn with the blood of your baby. That's your baby scattered across the street!" It was surreal and terrifying at once.

... I thought I'd feel better once inside the clinic. But as I sat in the waiting area, I could hear every single girl get out of her car and do that walk of shame. That was the worst part of the day. When the doctor pulled up later that morning, there was such a frenzy the building almost shook ... I said, "Are they going to be there when I leave? — not, "Is there any pain?" or, "How long will it take to recover?" He said, "No. After I arrive, they disperse."

Black and her supporters say that the proposed bill simply "enhance[s] current law," despite complaints from some medical professionals. The move comes only five months after the Republican-led Legislature decided to override Gov. Jay Nixon’s veto of a bill tripling the required waiting period for those seeking an abortion.