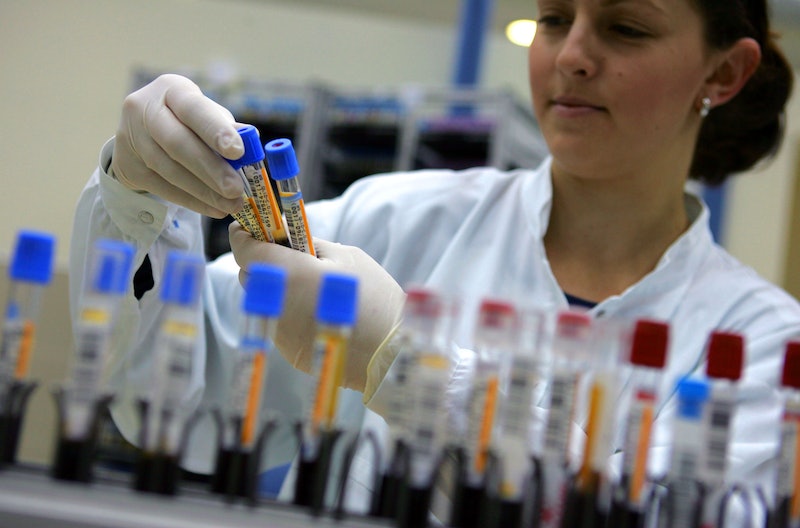 An innovative new medical device that plugs into a smartphone can test for HIV and syphilis in 15 minutes, and it only costs $34 to make. The lightweight accessory, designed by researchers from Columbia University, was engineered to use very little power and uses a finger-prick of blood. Traditional lab equipment used to test for HIV, the virus that causes AIDS, is expensive, costing thousands of dollars. The new device, which fits in the palm of one hand, was given to healthcare workers in Rwanda to perform blood tests at clinics and testing centers. It detected HIV or syphilis in nearly 100 patients with between 92 and 100 percent accuracy.

It apparently does not take much training for the workers to learn how to use the device, according to Science Daily, and patients said they would recommend it because it's easy to use. Not to mention, because the device is small and lightweight, health care workers could bring it to patients' homes, which would reduce the number of people who need to make the often lengthy trip to a clinic.

The implications for such an inexpensive, lightweight device that uses so little power are huge, and Samuel Sia, head of the research team that developed the device and its specs, believes it could lead to faster treatment for children of mothers with HIV, and perhaps eventually near-eradication of the disease, he told Bloomberg Business:

If you diagnose and treat them on the spot, you can save the life of a newborn... If it’s not treated, you can have stillbirth.

Although there is certainly an immediate need for quick blood tests for HIV and other illnesses in impoverished areas of Africa and other parts of the developing world, Sia said he thinks the test could have practical applications in the U.S. and Europe as well, to track patients' risk for diseases like diabetes and heart disease.

According to UNICEF, great strides have been made in reducing HIV rates in African countries, but there are still 17.1 million people living with the virus in eastern and southern parts of the continent. If early detection and treatment can be brought to pregnant women and to children in countries ravaged by the disease, this little hand-held smartphone app could make a significant impact in the battle against AIDS.