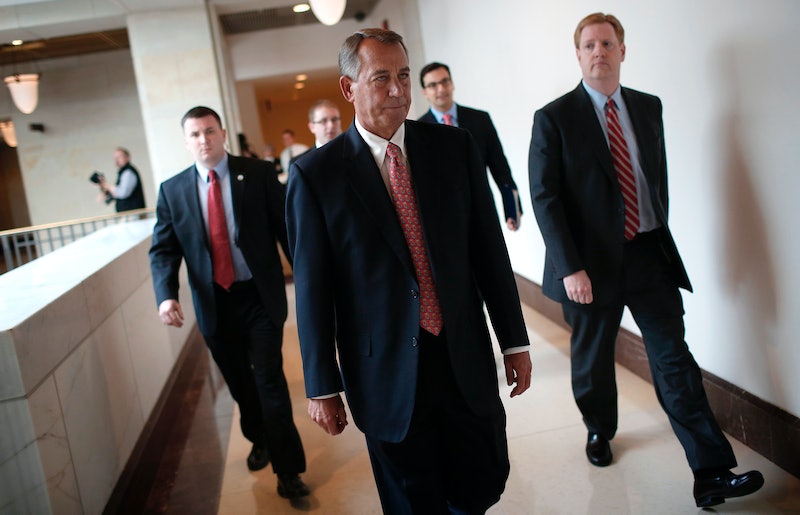 In an unorthodox and puzzling move, House Speaker John Boehner announced that the GOP would accept the Supreme Court's gay marriage ruling in a press conference Thursday, despite the party having spent $3 million defending the costly Defense of Marriage Act (DOMA) in 2013. House Republicans footed the hefty bill in 2011 after President Obama announced that his administration would no longer defend the constitutionality of the law, and the GOP contracted attorneys with Bancroft LLC to continue defense of DOMA and burned through over half of that figure by October 2012.

When asked whether Republicans would weigh in again in any legal capacity on the upcoming Supreme Court ruling, which is expected later this year, Boehner responded, "I don’t expect that we’re going to weigh in on this. The court will make its decision and that’s why they’re there, to be the highest court in the land."

I wish the President would show as much deference to the House as the House is showing to the Supreme Court. Bigger-picture: Republican leadership is keenly aware that fiscal and jobs issues are the reason the GOP won record electoral victories last November, and continuing that focus will be the priority of the House.

The surprising twist follows months of conservative commentary that runs in direct opposition to Boehner's statement. In a speech on Jan. 12, presidential hopeful Ted Cruz rejected the notion of a Supreme Court ruling, maintaining that the Constitution had made it clear that the issue was a "question for the states," and not "a question for a bunch of unelected federal judges who may disagree with the democratic views of the people who live in the United States of America." In October, Kentucky Sen. Rand Paul, another presidential hopeful, told CNN's Peter Hamby,

I believe in old-fashioned, traditional marriage. But I don't really think the government needs to be too involved with this, and I think the Republican Party can have people on both sides of the issue. I don't want my guns registered in Washington or my marriage. Founding Fathers all got married by going down to the local courthouse. It is a local issue and always has been.

Florida Sen. Marco Rubio has also questioned the authority of the Supreme Court in recent days, telling reporters in a brief interview on Jan. 7:

While I believe that marriage should be between one man and one woman, while people want to change that law — and a lot of people apparently do – there is a way to do that. You go through the legislature, or you go on on the ballot, but I don’t agree the courts have the power to do this.

Softer decrees in indirect support of gay marriage have peppered the GOP in recent years as public opinion begins to swing further left, prompting prospective presidential candidates to follow suit. The Supreme Court is expected to hand down a ruling by June of this year, potentially altering the landscape of Republican politics dramatically by 2016.