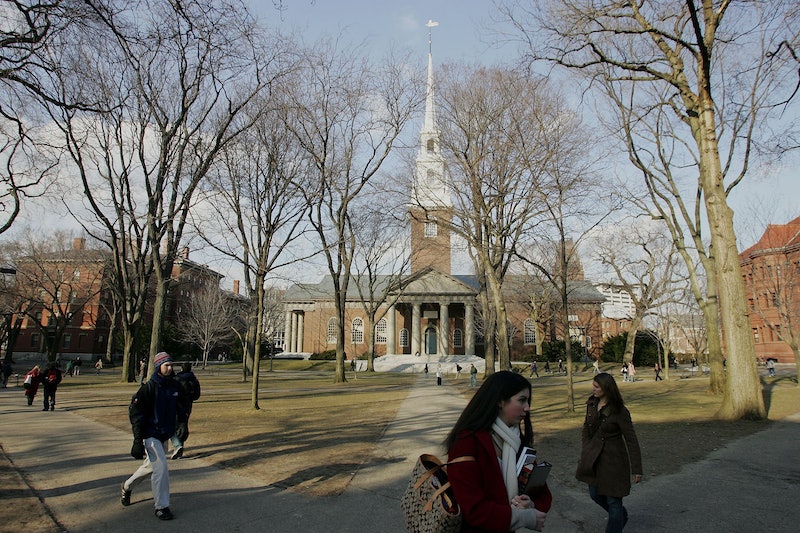 In news that is not news and is only news because everyone already thought it was a thing, Harvard has officially banned teacher-student relations, making clear a policy that has been tacitly accepted for, you know, ever. On Thursday, the top-ranked university joined a surprisingly small but growing number of campuses across the country to instate formal rules that prohibit such relationships in a move that administrators say is a response to the ongoing Title IX investigations affecting the school. Apparently, the previous policy in place was unclear in terms of "what constituted an appropriate relationship between undergraduate students and faculty members," and consequently, the policy has been revised to explicitly prohibit any such hanky-panky. Phew.

Alison Johnson, a history professor who served as the head of the Faculty of Arts and Sciences Committee on Sexual Misconduct Policy and Procedures, told The New York Times, "Our rule is that if you are supervising, evaluating or grading someone, you should not have a sexual relationship with that person." This means that the ban also includes potential relations between graduate students, who may serve as teaching assistants, and undergraduates who are in their classes (but only while in their classes, it seems). And while Johnson told The Washington Post that she was unaware of any such existing relationships, the policy will serve as a sharp reminder that such romances are more than just frowned upon, they are, in fact, forbidden.

Along with Yale and the University of Connecticut, Harvard reflects a growing trend amongst institutions of higher education to unequivocally deny the possibility of student-teacher liaisons. After all, there are unmistakable power dynamics at play that would make for some serious potential hazards. Billie Wright Dziech, a University of Cincinnati professor and an expert on such relationships, warned against these romances in an interview with Bloomberg, saying, "Some schools have a tiny minority of professors who use their popularity and prestige to empower themselves, and students respond to it. This is a very, very serious problem for higher education."

And to address it, Harvard has decided to do away with the possibility of such relationships altogether. As Johnson told the Boston Globe,

If you and I are sitting next to each other on a ski lift, and the sparks are flying, and it turns out I’m a professor in the history department, and you’re a senior at the computer science department at Harvard, now we are done. No more sparks. I ski off to the left, and you ski off to the right.

Harvard has yet to disclose what penalties would be instated for both professors and students who violate the newly approved policy.

Of course, no one is exactly raising their hands to ask, either. Rather unsurprisingly, the new rule has met with little protest, and despite our millenial penchant for laissez-faire policies when it comes to personal and social issues, this student-teacher ban seems like common sense to most. Johnson told the Post,

Indeed, far from being perceived as paternalistic, student groups have welcomed the new policy, recognizing it as a step forward in the university's role in protecting its students against unwanted sexual advances. Our Harvard Can Do Better, a campus group that advocates against sexual assault, responded to the announcement by saying that the revised policy is "a crucial indictment of unacceptable unequal-status relationships that have the potential to endanger students." They added,

We hope that this is just the beginning of a thorough investigation into the correlation between power disparity and sexual assault at Harvard, and we look forward to hearing more about Harvard’s plans for the implementation and the sanctions that will be put in place for violations.

Surprisingly, the American Association of University Professors (AAUP) does not endorse such bans, but has admitted that such relationships "are fraught with the potential for exploitation." Still, the AAUP seems to be the only organization offended by the new rule. Anita Levy, a senior program officer in AAUP’s department of academic freedom, tenure and governance, told Bloomberg, "These relationships are going to occur on campus and you must put as many ethical checks on them as possible, but a blanket prohibition doesn’t seem appropriate. You don’t throw the whole thing into darkness by prohibiting it." It is unclear how a ban i not the best ethical check available, but perhaps Ms. Levy knows something we don't.

Admittedly, Harvard's policy is far stricter than many other schools, with its widespread disallowance of all faculty-student relationships. At other nearby universities, like Boston College, Boston University and Northeastern University, such romances are strongly discouraged, but not altogether or expressly forbidden. Still, it seems that when it comes to sexual relationships between professors and their undergraduates, this is no time to be lax.

So thanks Harvard, for doing what we thought you'd already done!