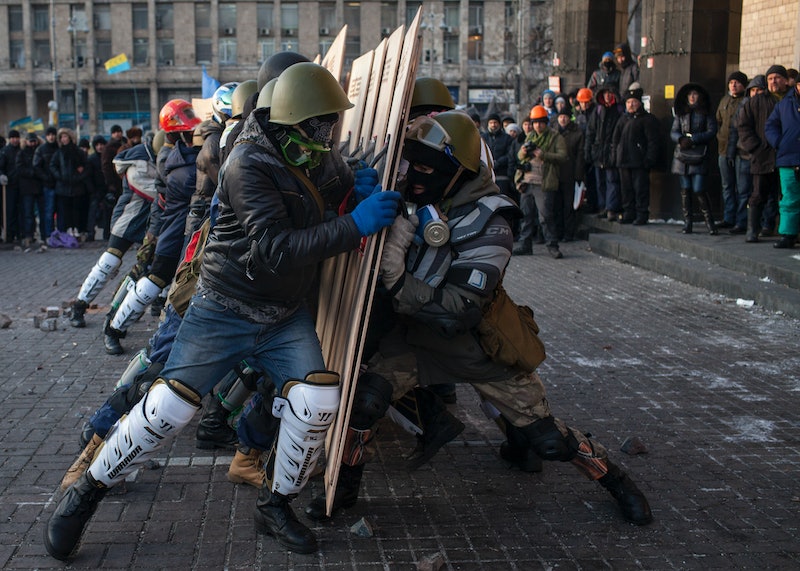 The Ukranian conflict took a hopeful turn on Friday, as pro-Russia rebels and Ukranian forces agreed on a humanitarian corridor to allow the evacuation of civilians caught in between the crossfires. The agreement comes as German and French leaders, scrambling to diffuse the situation, prepares to bring a peace plan to Moscow.

Russian separatists said they reached a deal with Ukrainian officials permitting civilians from Debaltseve to leave the area. A major railway hub on between the two main rebel-controlled cities, Debaltseve has become the central target of a rebel offensive, reported the Associated Press, resulting in a declining population that has gone without power, heat and running water for close to two weeks.

The upsurge in violence over the past two weeks means that getting both sides to agree to a modest armistice is a breakthrough in itself. Russia fervently denies backing the rebels with manpower and weapons, but Secretary of State John Kerry rejected the claim while visting Kiev on Thursday, while noting that President Obama has not ruled out the possibility of arming Ukrainian soldiers.

Both Russia and Western European leaders have warned against arming Ukraine, though for markedly different reasons. The Kremlin said that sending weapons to Kiev would cause "colossal damage" to ties between the former Cold War enemies, while other European nations fear that arming the beleaguered country could result in further conflict.

Amid those concerns, European leaders, fearing further escalation of the conflict spilling over into the rest of the continent, have rushed to push forward a peace plan. German Chancellor Angela Merkel and French President Francois Hollande are set to arrive in the Kremlin Friday for talks with Russian President Vladimir Putin, following a meeting with Ukrainian President Petro Poroshenko the day before discussing their proposals.

According to the Associated Press, Hollande told journalists in Paris before heading to the airport to Moscow:

Everyone is aware that the first step must be the ceasefire, but that it cannot suffice. We must seek a global solution. We should have hope.

Western leaders reportedly rejected a proposal sent to Berlin and Paris from Putin this week, seeking increased rebel territory and autonomy. After an unexpected visit to Kiev for emergency consultations with Poroshenko, Merkel and Hollande now head to Moscow to present a counterproposal.

Prior to her departure from Germany, Merkel told reporters that a military solution was not viable, expressing uncertainty over the outcome of her Moscow trip. She said:

The French president and I have decided to do something against this escalation and to use all our power with direct visits to Kiev and to Moscow today to stop the bloodshed as soon as possible...

We are convinced that there's no military solution to this conflict, but we also know that it's completely open whether we will manage to achieve a ceasefire with these talks. We don't know if this will happen today or whether further talks are necessary, whether these will be long or short talks in Moscow.