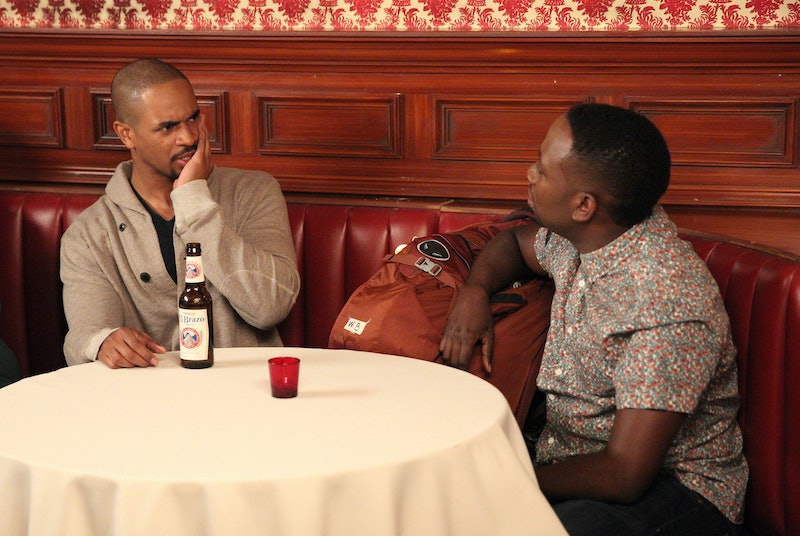 Sad news (in case you hadn't heard): Just in time for Valentine's Day, New Girl broke my heart by announcing that Damon Wayans, Jr. would be leaving the cast after Season 4. And that mean we'd better spend as much time with Coach while we can before he leaves. Luckily, in the episode airing on Feb. 10, the gang goes out together on a Valentine's Day bar crawl, and our beloved, soon-to-be-departed phys-ed teacher gets a little storyline of his own: Coach keeps running into a girl named May (played by actress Meaghan Rath of Being Human ). But just who is Coach's new girl and is she right for New Girl's most athletic roommate?

Since I'm not exactly a swami, I'm looking to Rath's past for clues. Like everyone else acting on television today, Rath is Canadian. "There's a real energy to Montreal, especially the artist area I live in," she told Complex. "People make enough money to pay their rent and then have a good time...It's not a city like Los Angeles, for example, where everyone is in the entertainment industry, or is trying to be in the entertainment industry. Montreal opens your mind up to so many different things."

Well, New Girl takes place in L.A., so Coach might not be so open to the pro-Montreal attitude, but having an open mind is definitely an advantage. How else might Rath be right — or wrong —for Coach?

Her Biggest Role Was Not Living

Until last year, Rath played Sally Malik on Syfy's adaptation of Being Human. Sally's not shy and has a big personality (plus) — but she's also a ghost investigating her own murder (minus). Or maybe it's not that much of a disadvantage — Rath didn't let Sally's death bring the character down all that much. "I see her as the person that she was in life," she told Collider. "In life, she was someone that was vibrant, smart, funny and outgoing, and that lived her life a certain way. She was very involved in everything that she did, and had big plans for herself. In death, she’s the same way, but now add to that her struggle of figuring out what she is, where she is, where she’s supposed to go and how she’s supposed to get there." I guess we can leave it up to Coach to decide if he needs a girlfriend with a corporeal form.

She's on the Big Screen, Too

Rath is also in a movie called Three-Night Stand, which was put into limited release theatrically a couple weeks ago (and is also on VOD). In it, she plays a newlywed who takes off for a romantic weekend away with her husband, only to discover that his ex-girlfriend is the new owner of the lodge where they're staying. Oops! Sound complicated. But New Girl is nothing if not complicated when it comes to romantic entanglements, so it seems like she'll actually fit right in there.

This Is Her Puppy

And, good God, it's adorable. I think he deserves another look.

That face! I don't know how Coach feels about dogs (certainly not the same way that Winston feels about cats), but I'm sold.