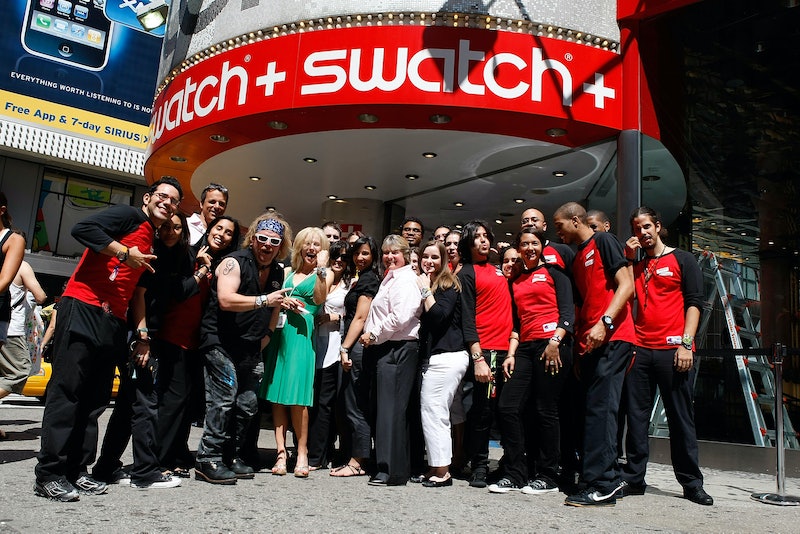 Lookout, Apple! Swatch, an accessory that is emblematic of the '80s, at least for me, will launch its own smartwatch in the next few months. The Swatch smartwatch, which will likely compete with the Apple Watch at retail (let the wearable tech wars begin!) has some fresh, cool features. It doesn't need to be charged in order to communicate with the web and you can use it to make mobile payments! Totally cool, yes, but, like, thrilling? Hmm…

According to The Business of Fashion, the Swatch smartwatch should go on sale within the next three months and will work with Windows and Android software. Swatch has had its hands in this area, at least from a tech standpoint, for a while now. It has crafted batteries so thin that they bend and that are long-lasting. Its Tissot brand has manufactured touchscreen watches since 1999. Those timepieces have an altimeter, a compass, and sensors that record dive descent.

Even so, the brand previously said it wasn't waving the flag or ready to revolutionize this market, noting that small screens posed a problem for effective communication and that the charging needs could be an issue.

All in all, the watches appear to pretty much do everything that smartphones do. You can communicate. You can use apps. You can make mobile payments. Why does this need to be done via a watch when you have a cell phone that has a clock and much the same features? Is it that we as a culture think gadgets are sexy and like them even more when we can actually wear them as fashion accessories, too?

So yeah, the Swatch smartwatch, like the Apple Watch, will be nerdy cool and all, but blowing my mind? Not really.