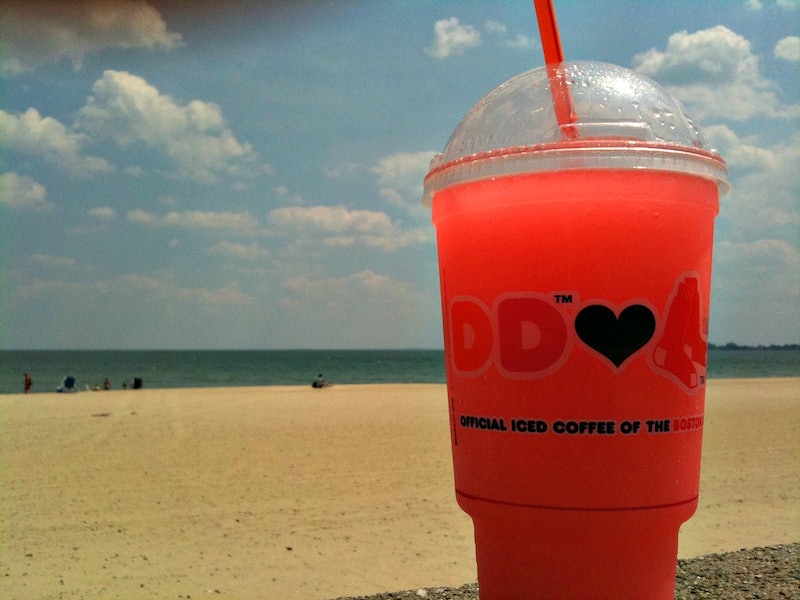 Starbucks isn't the only coffee chain to have some exciting new additions coming to its menu soon; its Massachusetts-based competitor has a few tricks up its sleeve, too. Dunkin' Donuts is expanding its frozen drink menu throughout 2015, giving us three new options beyond the Coolattas already available. They'll be introduced in selected Dunkin' locations throughout the Northeast beginning this month; locations elsewhere in the country will follow throughout the course of the year.

DD started offering what it calls “Coolattas” way back in 1997 (can you believe that's almost 20 years ago? Man, I'm getting old). After Starbucks struck hit pay dirt with the Frappuccino in 1995, obviously the only thing to do was to create something similar; hence, Coolattas. They're available in a variety of coffee-type flavors, as well as in three non-coffee ones: Strawberry, Minute Maid Orange, and Vanilla Bean. So what are the new additions? They're Fruit Smoothies, Coolatta Lites, and Frozen Dunkaccinos.

I'll admit that I was a little underwhelmed by these new options at first, mostly because… well, they sounds remarkably similar to the things that are already on the menu now. When you look a little closer, though, there are some differences; they might seem tiny, but they're big enough to make a difference (in most cases, at least. There's an exception, as you'll see). Here's how they stack up against each other:

The strawberry and orange Coolattas currently offered are probably closer to Slushies than to smoothies: They're made with fruit juice, but not actual fruit. The new smoothies, however, will be proper smoothies, made with real fruit and low-fat yogurt. They'll come in two flavors: Strawberry Banana and Tropical Mango.

If the Coolatta is Dunkin's answer to the Starbucks Frappuccino, the Coolatta Lite is the equivalent of the “Skinny” drinks on the Bux's menu. According to Dunkin Donuts' website, a small Coolatta can have anywhere between 200 to 420 calories per drink, depending on the flavor; the new Lite options will have 33 to a whopping 80 percent fewer calories.

This is the one that has me stumped. I've never consumed a hot Dunkaccino myself, but it's described as “a unique blend of coffee and chocolate flavors” — which sounds an awful lot like a mocha. There's no mocha on the hot drinks menu at present, but there is a mocha Coolatta flavor. How will a frozen Dunkaccino differ from the other frozen mocha option on the menu? No idea, but I'm open to suggestions.

Personally, I've never been a huge fan of Dunkin's blended drinks; they've always been a bit too sweet for my taste (which is actually pretty impressive, given the fact that I've usually got an enormous sweet tooth). But for those of you who swear by them? They don't sound too bad. Be on the lookout for them as they arrive in DD stores over the next year. Oh, and if anyone manages to figure out what sets a Frozen Dunkaccino apart from a Mocha Coolatta, I'm all ears — inquiring minds want to know!