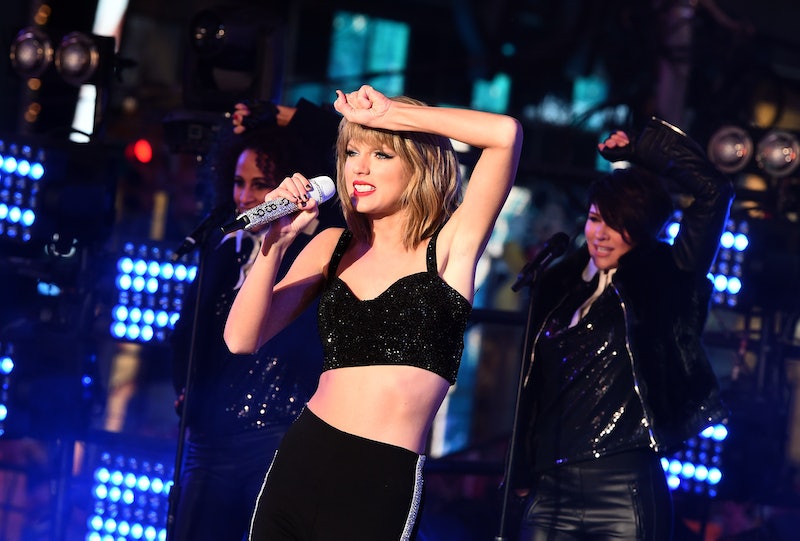 Taylor Swift is a good friend. How do I know this? Well, because she's a fantastic imaginary one to me in my fantasy world and because she doesn't let fame affect the relationships that were established before her stardom, either. Case in point, Taylor Swift is bringing her longtime best friend Abigail Anderson to the Grammys as her date, as she reveled on Twitter on Friday. In the post, Swift included a picture of herself and Anderson from ten years ago in some pretty ridiculous princess getups. While Anderson herself isn't famous (there's hope for us!), she may as well be because she's been a major player in Swift's life, from high school to her songs and right down to good ol' social media.

This is an ideal Grammys pairing for sure, although, no offense to Anderson, but I would've loved to see Meredith and/or Olivia dressed in diamond studded collars and strut their stuff down the red carpet. But hey, I don't think the Grammys staff provides any litter boxes and it'd get ugly if those feline friends decided to ruin someone's designer shoes. But back to Abi, as Swift affectionately calls her. She's earned her keep as Swift's official Grammys date because, well, she's been by her side through just about everything.

She's been a musical inspiration for Swift

"You sit in class next to redheaded Abigail/And soon enough you're best friends/Laughing at the other girls who think they're so cool/We'll be outta here as soon as we can."

And, a life inspiration as well

Swift told CBS This Morning about Anderson, "A good girlfriend for me is someone who is an individual and has something that they are deeply passionate about. Abigail works with making sure that veterans from World War II get their compensation. Like, she's so passionate about it and it couldn't be more different from my career or Lena's career, but the fact that she is so passionate about what she does allows her to be able to relate to me on that level, that I'm so dedicated to what I do."

They reached important milestones together...

She's in with the cats in Swift's life

She's got the etiquette on lock.

And, they share a fantastic sense of humor (ya know, that'll carry them through the Grammys' awkward moments)

I can only imagine there will be LOTS of those.

Have fun, girls. I'll be watching from my couch, oozing with jealousy.