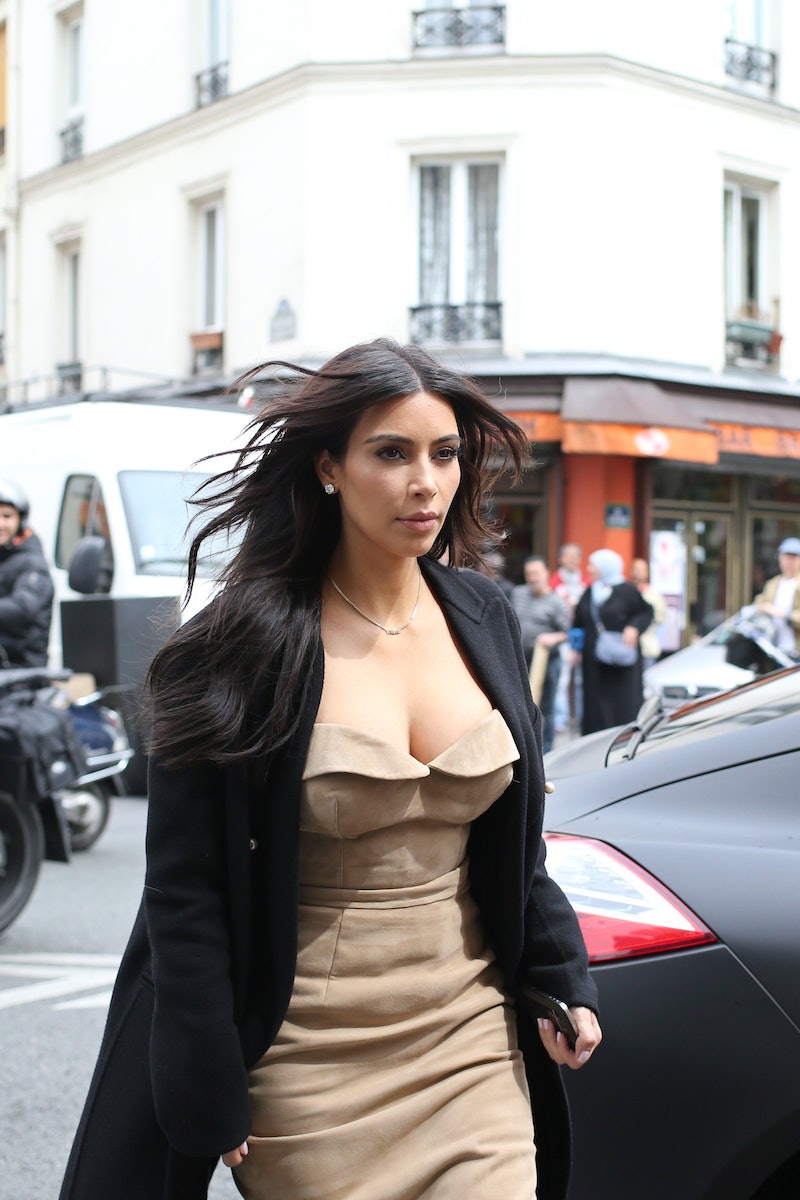 The internet has barely healed from being broken mere weeks ago due to a certain nude photo shoot, but already there's another crash on the horizon. Kim Kardashian has modeled nude for Love Magazine 's risqué Spring/Summer 2015 issue and this time the gloves — and her entire ensemble — have come off. Complex announced that the Steve Klein-photographed feature contains a number of partially-clothed images and one full-frontal snap which leaves Kardashian more exposed than ever before. The reality television star is known for her adoration of the camera, but is the spread feminist or simply exhibitionist?

Given Kim Kardashian's history of partial nudity for the sake of editorial creativity and notoriety, Love Magazine's bare image is hardly unprecedented, but the project is a step beyond Kardashian's typical skin-baring wardrobe. Paper Magazine displayed Kardashian's rear end in all its glory; a recent GQ spread left only a sheet and Kardashian's hands to strategically cover her body; and to be entirely frank, the reality star's Instagram stops just short of the content users can "Mark Inappropriate". Love's poolside shoot, by contrast, features Kardashian in a number of compromising positions and various states of undress, but the spread's most controversial shot features the star completely au naturel, posing against a doorway.

However, the provocative image raises significant questions of female equality and gender stereotypes as depicted in the media. Much like Rihanna and Rumour Willis, Kim Kardashian is demonstrating her right to display her body how she pleases, but to what end? There seemed to be no cultural or political statement to be made by the star's choice. Rihanna's transparent CFDA provoked commentary on the current state of fashion and Willis's topless protest was in ode to the "Free The Nipple" movement, but Kardashian's full frontal shot simply appears to be gratuitous.

Nor does Kardashian's nudity appear to serve an artistic purpose. The robe which vaguely qualifies the image as sartorial is barely visible in the shot, and Kardashian's body takes up so much of the print that it could barely be considered a landscape or portrait. Moreover, the editorial's story provides an unsettling narrative, at one point picturing Kardashian huddled in a phone booth covered by only a jacket

Not only is Kardashian's decision to engage in a similar shoot contradictory to values of modesty and respect the star once felt had been disrespected, the choice also propagates the negative message to Kardashian's legions of young female fans. If Kim Kardashian succumbs to pressures to display her body despite her misgivings, it must be the thing to do.

In a matter of five years, Kardashian's opinions seem to have drastically reversed, raising red flags about editorial pressure and Kardashian's own need to prove her worth through nudity. However, the reality actress and husband Kanye West have become Hollywood's most notorious exhibitionists, and their two year-long publicity kick may be responsible for Love's bawdy content. With regards to the image itself, only Kardashian's opinion of the material matters. It appears that she's pleased with the photos this time around (she's been Tweeting and Instagramming them out like mad), so I can only hope this was a feminist decision made entirely by the star herself.