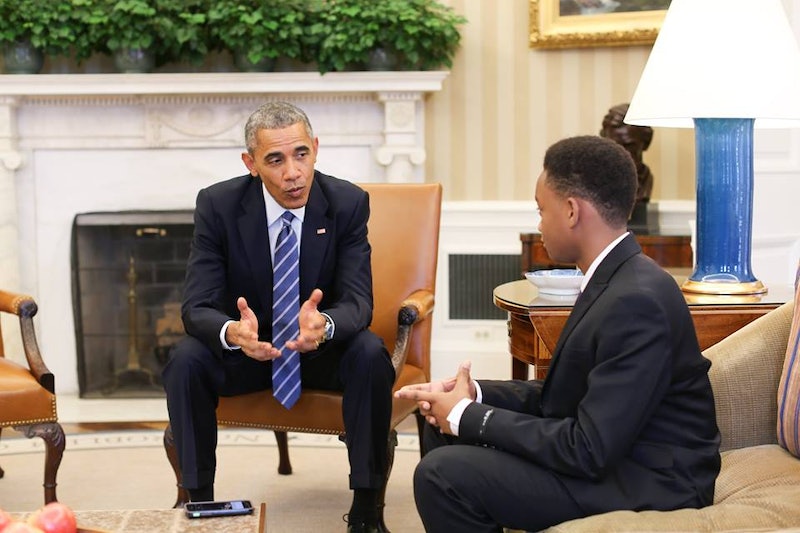 The sensation that is Humans Of New York, the photography project by Brandon Stanton that profils everyday New Yorkers and presents them retelling a moment of their life, reached the White House this week. The latest Humans Of New York model is President Obama himself, who met Stanton when Stanton visited the White House alongside one of his subjects, Vidal Chastanet, who spoke about his incredible Brooklyn principal Nadia Lopez last month and sparked a project that raised a million dollars for the school.

The accompanying photo Stanton posted Friday shows Lopez sitting with Obama, and the caption, "When is the time you felt most broken?" — a question presumably put the president by Lopez. Obama replied:

I first ran for Congress in 1999, and I got beat. I just got whooped. I had been in the state legislature for a long time, I was in the minority party, I wasn’t getting a lot done, and I was away from my family and putting a lot of strain on Michelle. Then for me to run and lose that bad, I was thinking maybe this isn’t what I was cut out to do. I was forty years old, and I’d invested a lot of time and effort into something that didn’t seem to be working. But the thing that got me through that moment, and any other time that I’ve felt stuck, is to remind myself that it’s about the work. Because if you’re worrying about yourself—if you’re thinking: ‘Am I succeeding? Am I in the right position? Am I being appreciated?’ — then you’re going to end up feeling frustrated and stuck. But if you can keep it about the work, you’ll always have a path. There’s always something to be done.

Stanton posted another photo of the president later Thursday. The president answered the question: “Who has influenced you the most in your life?”

My mother. She had me when she was 18 years old, and my father left when I was one year old, so I never really knew him. Like a lot of single moms, she had to struggle to work, and eventually she also struggled to go to school. And she’s really the person who instilled in me a sense of confidence and a sense that I could do anything. She eventually she went on to get her PhD. It took her ten years, but she did it, and I watched her grind through it. And as I got older, like everyone else, I realized that my mother wasn’t all that different than me. She had her own doubts, and fears, and she wasn’t always sure of the right way of doing things. So to see her overcome tough times was very inspiring. Because that meant I could overcome tough times too.

Answering a question apparently put to the president by Vidal himself, Obama said:

You don’t do things alone. Nobody does things alone. Everybody always needs support. For a young man like you, you should never be too afraid or too shy to look for people who can encourage you or mentor you. There are a lot of people out there who want to provide advice and support to people who are trying to do the right thing. So you’ll have a lot of people helping you. Just always remember to be open to help. Never think that you know everything. And always be ready to listen.