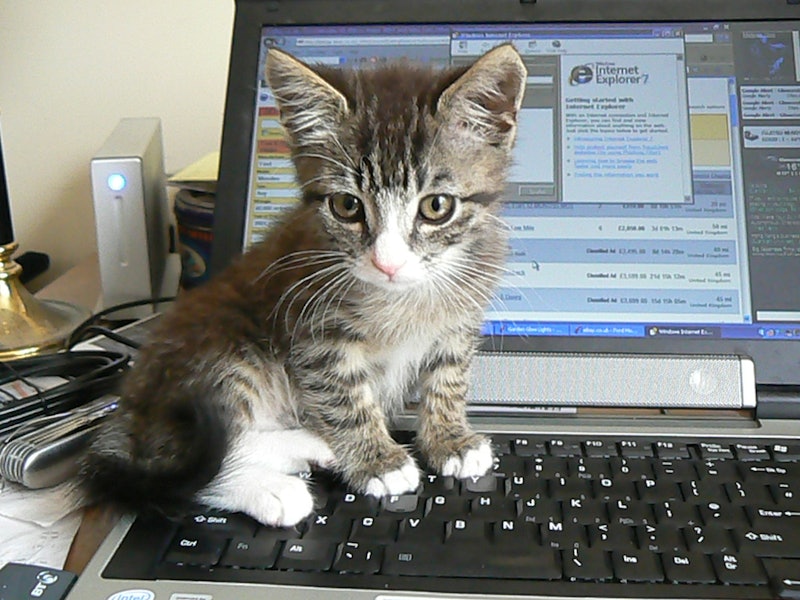 Working remotely or telecommuting can be difficult enough all on its own — but when you add a fuzzy beast or two into the equation? Let's just say that working from home when you have a cat is a whole 'nother can of worms. As is the case with most unique challenges, though, it can be accomplished; you just have to get a little creative about it.

Graphic designer Pam Brown of dezinegirl creative studio absolutely hears where all us cat-owning remote workers are coming from; in fact, she's in the exact same metaphorical boat. After she adopted a kitten last June, she wrote recently on her blog, The Color Loft, she found herself having to rethink her entire work routine — a problem compounded by the fact that Josie (yes, her name is Josie the Pussycat) was an extremely demanding little kitty. After a whole lot of research along with some trial and error, though, Brown sorted out what works and what doesn't — and then, luckily for us, she decided to compile what she'd learned into a gorgeous little infographic.

I've singled out some of what I think are the most useful tips below (and included a few personal anecdotes — this is what life is like when you work from home with not one, but two cats); head on over to The Color Loft to see the complete infographic.

1. Build your cat into your schedule.

Cats love routine, so if you stick to a schedule of your own, they'll figure out how they fit into it on their own. Mine goes something like this: I'm out of bed and in the shower at 7:30 AM; then I grab some coffee and sit down in front of my computer by 8. Both my cats like to play fetch (I'm convinced they're both part dog, so when boot up my computer and start working, I make sure I bring a couple of their favorite toys with me. The first hour or so of my day is usually devoted to administrative stuff and finding topics to write about; since these tasks don't require the same amount of concentration actual writing does, so it's easy to throw around a few toys for them while I take care of business (they always bring them back, so I don't even have to get up from my computer to play with them). They've usually tired themselves out by the end of the hour — right when I'm getting to the stuff that requires my full concentration. They wander off for a nap, I get writing, and everything moves along like clockwork. Routine is both your friend and your cat's friend.

If your cat decides it wants your attention, it will do whatever it has to in order to get it: Climbing all over your work surface, chewing on your computer cords, attacking your arms or legs while you're trying to work, and so on. Cats have a reputation for doing whatever the hell they want, regardless as to what you try to teach them — but they can be trained. By younger cat used to like to sit directly on top my keyboard; after I'd scolded her and removed her from it enough times, though, she learned plopping her butt down on my laptop was a no-no. Similarly, you can teach your cat not to enter your office, or bug you when you're at your desk, or whatever; it just takes a little bit of time. Check out the ASPCA's website for some cat training tips.

3. Learn how your cat feels about telephones.

Telephone meetings are a necessary evil for work-from-homers — but weirdly enough, whether or not you have a cat around can make a huge difference in how easy they are to pull off. Some cats can get agitated by ringtones or by the pitch you speak at when you're using the telephone. They might try to attack the source of the noise — that is, you — if they strongly dislike those sounds; as such, you might either want to put your cat in another room while you're taking work-related phone calls.

But of course, not all cats dislike the telephone that much. Both of my SO's and my cats absolutely love phone calls. I don't know how they know that we're talking on the phone, rather than to a person in the room — but they do. Somehow. It's like magic. Even if the phone isn't on speaker, as soon as a call starts happening, they both zip out and get really curious. They don't attack; they just want in on the excitement. It's kind of hilarious.

Check out the whole infographic over at The Color Loft. Happy working!