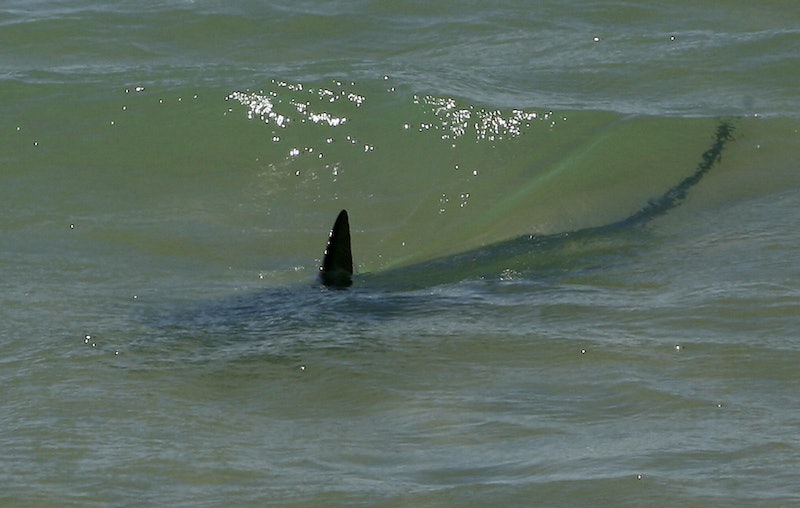 How do you feel about sharks? They're fascinating, majestic and impressive creatures, all in all, so it makes sense that so many people seem to gravitate towards them with such keen interest. Hell, one television channel even props up a whole week's worth of programming around them, though they're always getting in trouble for seeking sensationalist, fallacious angles. Which is an especially bad thing to do when you've got so much genuine weird shark content out there, like this: there's a terrifying photo of a dead goblin shark making the rounds today, and it's every bit as starling as you'd expect.

I readily confess that I'm easily disturbed by some of nature's more... macabre looking creatures, let's say. And there are few ghastlier sights than that of the goblin shark (scientific name Mitsukurina owstoni), a deep-sea relic of the distant past. Basically, when you look at a goblin shark, you're effectively looking back through evolutionary history — they're often referred to as living fossils, thanks to their carrying on of a species well over 100 million years old. Thanks to the incredibly deep waters they swim in, the goblin shark family has been largely gone untouched and unaffected through that time, which is perhaps why they looks so damn out of step with all of their undersea brethren.

The startling sight was discovered off the coast of Australia, when fisherman discovered the dead shark while reeling in a haul of crawfish. It was first reported by Merimbula News Weekly, so all due credit to them — otherwise, who knows if we would have gotten to see this weird creature in the flesh. And if there work is any indication, no matter what angle you try to snap a photo of this thing, it still sends a little chill through you. If all sharks looked like this, I can only begin to wonder whether they would've become such prevalent, in-vogue animals in our media and popular culture as they are today.

At risky of betraying my geekiness on this, there's something really special and unique about being able to look at a creature like this, even just a photo on a shark who's already dead. It's rare that a species has proven so durable and isolated that we get to see this kind of evolutionary throwback, especially as more and more animals are dying and becoming extinct. I can only hope the same fate never befalls the noble goblin shark, even if his head reminds me of the Alec Baldwin monster from Beetlejuice.

More like this
21 Absolutely Adorable Christmas Gifts For Dogs
By Carolyn Steber
If You Have Pets, You Probably Don't Realize You're Making These Common Mistakes
By Mackenzie Edwards
David Tennant’s Transformation In ITV’s 'Litvinenko' Is Astonishing
By Sophie McEvoy
Dolly Parton Joins TikTok & Debuts A Song About Baking
By Jake Viswanath
Get Even More From Bustle — Sign Up For The Newsletter