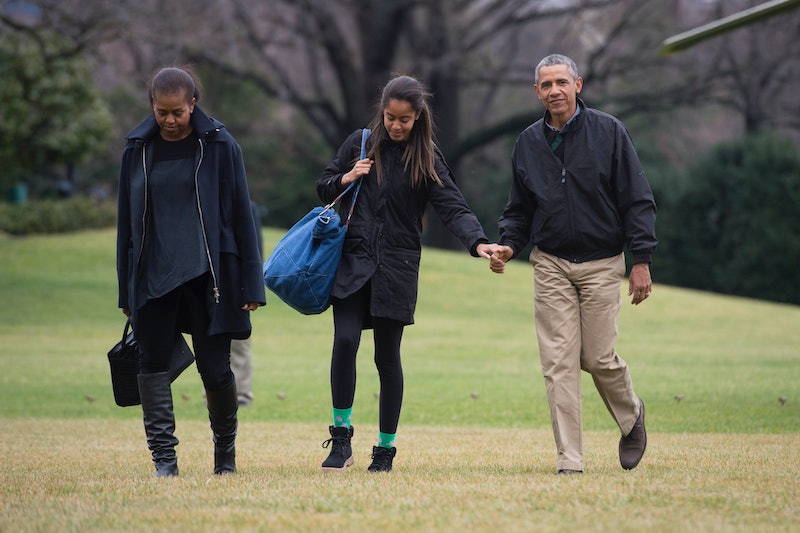 The college of choice for James Franco, Lady Gaga, and the Olsen twins — New York University — might be boasting an even more famous freshman in 2016. According to reports, Malia and Michelle Obama toured NYU while in New York City on Friday. Campus news site, NYULocal, and Twitter (obviously) were the first to report that the First Daughter might be considering NYU when an unsuspecting source got into an elevator with the Obamas during their tour of Goddard Hall. The pair were also spotted on the Upper West Side leaving Community near Columbia University around lunchtime — possibly after touring President Obama's alma mater?

According to NYULocal's source, students and faculty were told that the elevators in the Washington Square Park-adjacent dorm were "closed for the 10 minutes" Malia and Michelle were touring the building. The pair allegedly also visited Weinstein Hall while on their tour of NYU's campus. (Pro tip, Malia: Hayden Hall is easily the best freshman dorm.) Malia is currently a high school junior at Sidwell Friends School in Washington, D.C., so it makes perfect sense that she'd be considering potential colleges at this point. And where better for the President of the United States' daughter to go than New York City for easily the most-immersive college education of all time? OK, fine, that statement is a little biased coming from a recent NYU graduate. (But, seriously, girl, this is a great town for college kids.)

The pair were later spotted leaving popular Columbia-area restaurant Community, which will, naturally, make any NYU students that are eagerly anticipating riding the Silver Center elevators with Malia super-defensive.

My own bias aside, however, NYC is a great choice for the First Daughter — not only is it close to D.C., where Obama will be finishing out his second term during Malia's first semester, but it's a politically charged, cultural center of the universe. (And the falafel sandwiches on MacDougal St. are truly to die for.)