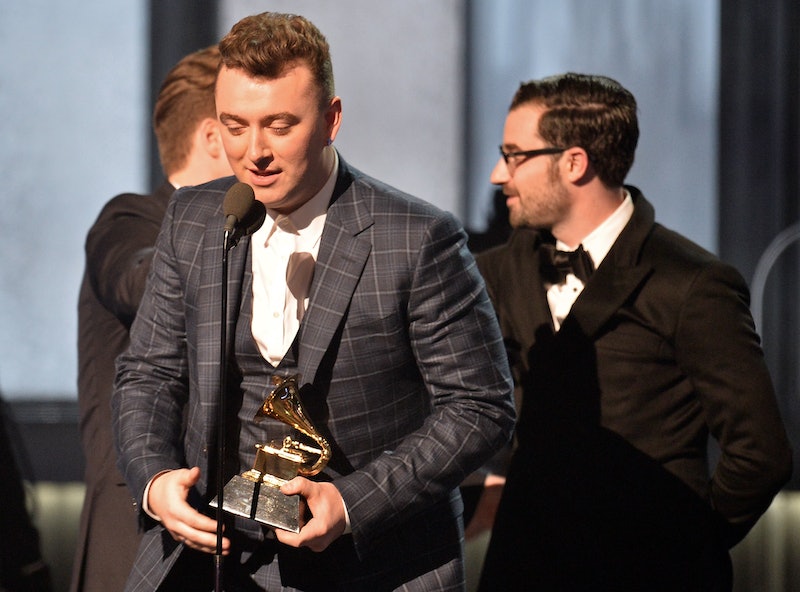 It seems ridiculous to crown a Grammys Record of the Year winner. After all, all five of this year's nominees have already won 2015. Because could you spend an hour listening to Spotify or the radio in the last 12 months and not find yourself listening to Iggy Azalea's "Fancy," Sia's "Chandelier," Sam Smith's "Stay With Me," Taylor Swift's "Shake It Off," or Meghan Trainor's "All About That Bass"? Yes, this year's crop of nominees are certainly overplayed, but that's exactly what makes a Record of the Year — it's a single that defines the year for music fans. So which record did the Recording Academy decide defined our 2015? Though it was a tight race, Sam Smith's "Stay With Me" won Record of the Year.

And, even though he had won three Grammys before it, it seems Smith saved his best speech for last. Taking the stage, Smith thanked his ex who inspired "Stay With Me." Said the singer:

Thank you all. It's the best night of my life. Just a quick one, I want to thank the man who this record is about who I fell in love with last year. Thank you so much for breaking my heart, because you got me four Grammys.

That's what we call shaking it off Taylor-style, eh? (And, while we're on the subject, shake off your loss, Taylor — it just wasn't your year!)

I can't be the only one who hopes this is the beginning of a new, happier Sam Smith, right?