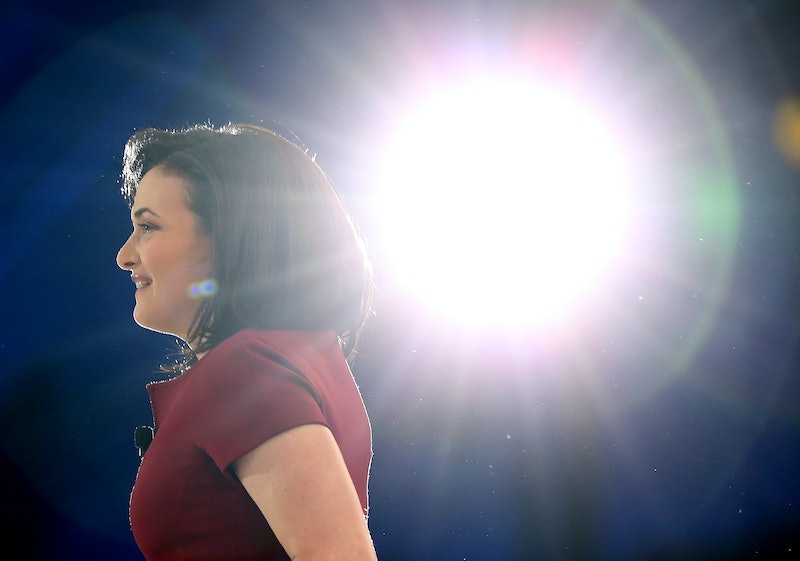 Facebook COO and all-round badass Sheryl Sandberg is spearheading an initiative aimed at supporting women studying computer science and engineering. The best-selling author has partnered with Facebook, LinkedIn, and the Anita Borg Institute to create Sandberg's Lean In Circles' Computer Science and Engineering chapter, which caters specifically to college women who code. Sandberg's Lean In Circles initiative was first established since 2013, and is described on its official website as "small groups that meet monthly to encourage and support each other in an atmosphere of confidentiality and trust."

As of this writing, there are more than 300 circles across the country that have been established at college campuses — everywhere from Stanford to UVA. The Computer Science and Engineering chapter of the Circles offer not just peer support from other female coders, but will provide guidance from Sandberg herself and LinkedIn CEO Jeff Weiner, both of whom have committed to engage in livestream sessions with students.

Employees across both Facebook and LinkedIn will also be donating their time to CS&E Circles students. The Anita Borg Institute, which famously champions women in technology through grants and outreach, will provide additional mentors and education tools to further support coding circles. Just 15 percent of Facebook's tech employees are female, while LinkedIn boasts 17 percent. Likewise, women enrolled in Computer Science programs spans just 35 percent of US college students and only 18 percent of the current workforce.

Sandberg used her Facebook page to announce the launch of Lean In Circles that cater to women currently enrolled in Computer Science and Engineering programs:

The solution to getting more women into CS is… getting more women into CS. This is because stereotypes are self-reinforcing; computer science and engineering classes “feel male” because they are dominated by men. As one CS student told me, 'There are more Davids than women in my department.' This is where peer mentorship and Lean In Circles come in... We hear from women on college campuses worldwide that their Circles encourage them to speak up, enroll in classes they were afraid to take, and apply for jobs even if they aren't sure they're ready.

The goal of Computer Science and Engineering Lean In Circles is to not just support students interested in tech, but to assist and support them in landing jobs after they graduate, as well as offering guidance to graduates just launching their tech careers.

Additional resources for women interested in careers in technology or who are already working professionals include Women Who Code and the Women's Coding Collective. For those interested in learning to code but are not enrolled in college, there's always Google's Code School and Code Academy.