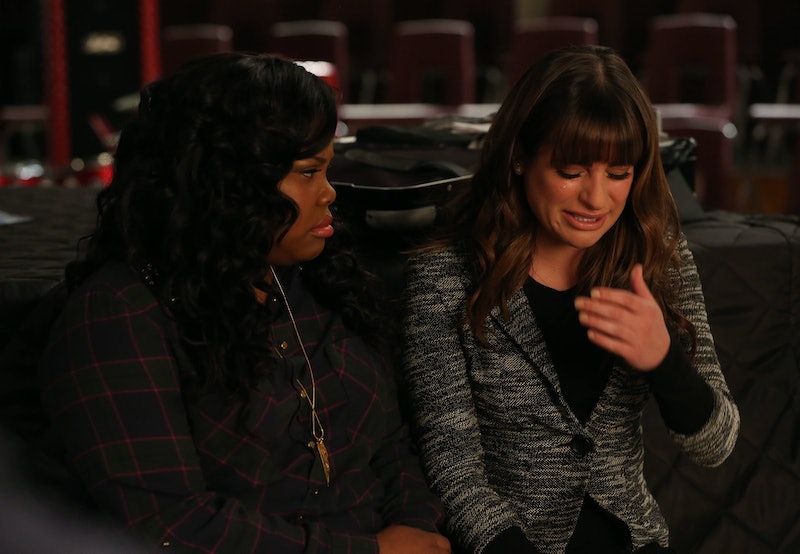 I think it's pretty obvious that Mercedes was easily one of Glee's most valuable characters in the newest episode "What The World Needs Now," on Friday night. Well, she and Brittany of course. Mercedes was originally asked to come back to McKinley to mentor the New Directions for sectionals, but she did so much more than that. Not only did she give her blessing for the official beginning of Samchel without hesitation about being Sam's ex and first love (though she did admit she was a tad jealous), Mercedes also helped Rachel get back on her feet as a performer and helped convince her to audition for a new Broadway show.

Mercedes arrived in McKinley like a beacon of light and basically ushered in a new era of Rachel-dom on Friday night's episode. While catching up with her old friend and friendly competitor, Mercedes told Rachel about a new musical Russell Simmons was producing and after Rachel laughed at her chances of even getting an audition, Mercedes revealed she had already secured one for her. Rachel then surprised everyone by revealing she would not fly out for the audition because she supposedly had too much to do with the New Directions. But we all know Rachel's not-so-secret reason for dismissing the audition so quickly. She was afraid.

It's not necessarily that Rachel was afraid to audition for something again, she was more afraid of her failures and seeing a repeat of the humiliation she had once endured so heavily. She was on the rise in the Broadway world and as she explained herself it "all came tumbling down." Rachel knew that when she was in high school, people used to laugh at her big Broadway dreams, but she never gave up because she knew they would come true one day. But when everything was ruined, she realized the laughter of failure was worse than the laughter of people not believing in her future. She was just too afraid to go through the pain once again.

But Mercedes, being the perfect, wonderful, supportive person she is, reminded Rachel of an important and completely true point. "We're all going to fail again and again... The hardest part is just getting up, shaking it off and getting on with it." Then she hit the point home even further with this line.

And sure enough, Rachel killed her audition with a rousing, powerful performance of Promises, Promises. When she came back home, she didn't need to be validated with a callback or a pat on the back from those with whom she auditioned, singing up onstage was enough for her to realize she was never going to doubt her dreams again. And she definitely had Mercedes to thank. Obviously, Rachel is not yet ready to leave the New Directions; she still needs to make sure the glee club's place at McKinley is officially solidified. But when that's done, she can solidify her place on the Broadway stage once again.