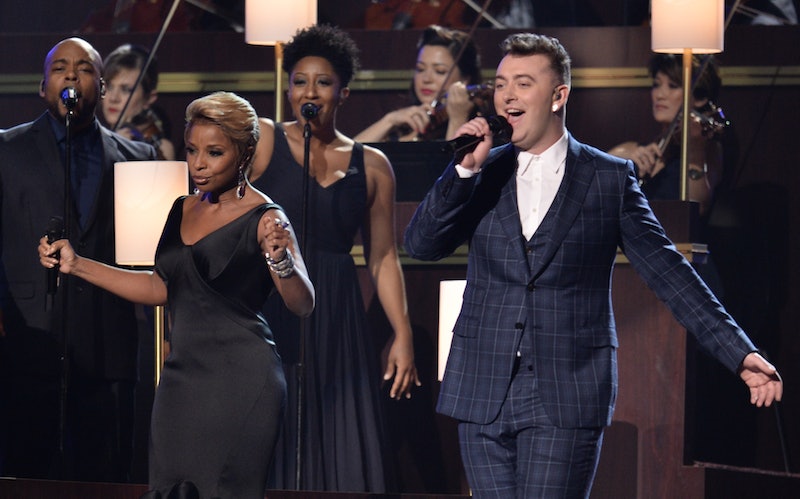 Sam Smith has gone from zero to winning the Grammy Award for Best New Artist in what seemed like a matter of seconds. Allow me this hipster moment: I first heard his incredible voice in Disclosure's slow-burn dance hit "Latch" in 2013, but then suddenly Smith's own singles became radio staples. In addition to "Latch," Smith has owned the airwaves with "Stay With Me" and "I'm Not the Only One" from his breakout album In the Lonely Hour. Now, the British crooner has graduated to being the Grammys' Best New Artist on Sunday night and giving the audience at the Grammy Awards soulful performance of "Stay With Me" with Mary J. Blige.

After an intro by Taylor Swift, Smith walked out on stage to thunderous applause and belted out the ubiquitous tune accompanied by an orchestra, a chorus of backup singers, and Blige, who was wearing a gorgeous black gown. Even though "Stay With Me" is a slow song, Smith and Blige's passion and enthusiasm made that Grammy stage come alive. This is why he won Best New Artist, folks.

Before the ceremony, the 22-year-old singer told the Grammys that he was feeling the pressure during rehearsals and revealed that he watched the 2014 Grammys from the back row of the theater. "It's an unhuman experience, if I'm honest," he said. "I just can't put it into words. I'm feeling very overwhelmed and I'm just trying to concentrate on not tripping on stage."

And he didn't. Well done, Sam Smith — you didn't trip and you knocked it out of the park once again.