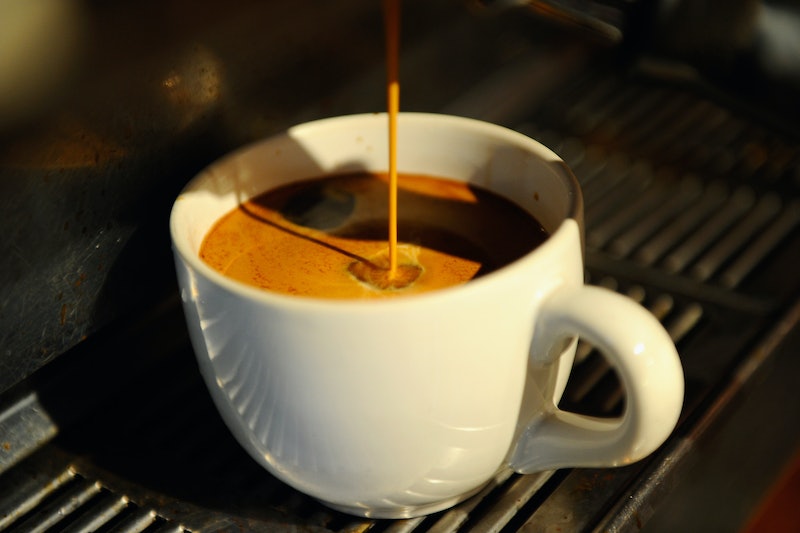 Coffee lovers, rejoice! In addition to helping to boost your workout, being an awesome anti-aging mask, and of course, helping you be a functional member of society in the mornings, here's yet another reason to love the black nectar of the gods: new scientific proof suggests coffee can lower your risk of endometrial cancer. So go ahead, drink your third or fourth cup of coffee, for science, of course.

A new study conducted by researchers at the Imperial College of London analyzed the health records of over 450,000 women, including 1,303 women with endometrial cancer participating in the European Prospective Investigation into Cancer and Nutrition study (EPIC), and 1,531 women with endometrial cancer who were a part of the Nurses' Health Study (NHS) or the Nurses' Health Study II (NIHII).

Researchers had them complete dietary questionnaires, then they analyzed the links between a total of 84 foods and endometrial cancer. From this list of 84 foods, they honed in on nine that could be associated with a risk of cancer, including yogurt, butter, potatoes, cheese, coffee, and more. They found that women who drank three cups of coffee per day lowered their risk of cancer by 19% compared to those who drank less than a cup per day. This is a huge deal because according to the American Cancer Society, 1 in 37 women has to deal with endometrial cancer (cancer in the lining of the uterus) at some point in her lifetime.

As a person who can fit in one, maybe two cups of coffee per day, I have to ask: when are these women drinking three and four cups of coffee every day and not messing up their sleep schedules/lives? This is a serious question I have. Furthermore, does decaf count?

However, before you go chugging sixteen cups of coffee, the scientists said more research needs to be done to see if coffee can be used to prevent endometrial cancer. They said, "further studies are needed to evaluate this question in other studies and to try to isolate the components of coffee that may be responsible for any influence on endometrial cancer." But just because science hasn't decided for sure that coffee can reduce your risk of endometrial cancer, it doesn't mean that coffee isn't an amazing elixir that has tons of health benefits aside from giving you energy. Below is a quick recap of my five favorite reasons you should drink more coffee:

A 2010 study found that people who drink three to five cups of coffee per day lowered their risk of developing Alzheimer's or dementia by 65%. 65! That's really significant, so if you have a family history of either of those diseases, it might be time to ramp up your coffee intake. Men's Health advised drinking a cup with each meal.

2. It May Protect Against Type II Diabetes

Researchers at UCLA found that coffee consumption increases plasma levels of a protein called sex hormone-binding globulin (SHBG), which has long been thought to play a role in the development of type 2 diabetes. Furthermore, researchers at Harvard found that participants who increased their coffee consumption by more than a cup a day over a 4-year period had lowered their diabetes risk by 11%. However, the studies used either black coffee or coffee with a little milk and sugar, so if your idea of a daily cup of "coffee" is a frappuccino with 165 cups of sugar and a mountain of whipped creme and syrup, I'm going to guess that you might still be at risk. Just sayin'.

3. Just Smelling it Can Reduce Your Stress

4. Coffee Can Reduce Your Risk of Cirrhosis

Good news for all my fellow binge drinkers out there: a 2006 study with 125,000 participants found that drinking at least one coffee per day lowers your risk of developing cirrhosis by 20%. That's one-fifth! I'm totally drinking Liquid Jazz's all night tonight (it's this awesome drink my favorite bar makes with coffee, Bailey's, and vanilla vodka). You're welcome, liver.

5. It May Protect Against Skin Cancer

New research conducted at the National Cancer Institute found that drinking coffee might protect against melanoma, and that people who drank at least four cups per day lowered their risk by 20%. But the best way to protect against skin cancer is still to wear sunscreen, so don't go rolling up to the beach with nothing but a bikini and an iced coffee.

I'll take a shot (of espresso, of course) to that!