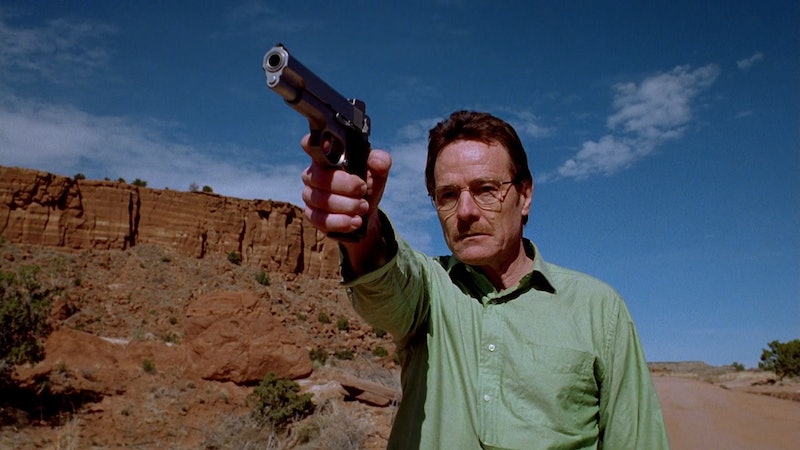 "Chemistry is the study of change," Walt tells his students in the pilot of Breaking Bad, and the same could be said of the show itself; over the course of the series' five seasons, viewers watched as Walter White evolved from Mr. Chips to Scarface. Sure, he had his reasons, and yeah, change is kind of inevitable when you're set on becoming one of America's biggest meth makers, but seeing just how much Walt had transformed in just a few short years still came as a major shock. After all, back in season 1, Walt was just a kind, mild-mannered chemistry teacher — or was he?

Because when I recently decided to re-watch the Breaking Bad pilot, I noticed something surprising: Walt was actually a pretty terrible person, even before the meth labs and the murders. And it wasn't just him, either; practically everyone on the show, from Skyler to Hank to Walt Jr., is awful in the premiere. They say mean comments, are constantly passive-aggressive, and display far too little care for each other's lives for such a supposedly close-knit family. Even Jesse, the most lovable TV character in the world, was not the best guy when we first met him. Here's what I mean:

Walt's flawed character is clear from the very first minutes, when he records a message to his family. Instead of apologizing for the giant mess he'd be leaving them if he died, he defends his actions by saying "no matter how it may look, I only had you in my heart." Like that makes it all better.

Later, Skyler throws him a surprise party, at which he doesn't even attempt to look happy. He also points out the mustard stain on his doctor's shirt, yells at his employer, and displays such disdain for Jesse that it's hard to imagine the two of them ever becoming close. Season 1 Walt was mean, guys.

Skyler gives her husband veggie bacon and lectures him about cholesterol on his birthday. She also checks her eBay bids while giving him a hand job. Skyler needs to work on her timing.

Season 1 Hank is awful. He makes fun of Walt at his birthday party, shows the kid how to hold a gun, and thinks jokes about Walt's masculinity is the height of humor. Most disturbingly, however, he is solely responsible for Walt's newfound career. "Get a little excitement in your life," he says to Walt while telling him about how much money you can make from meth and inviting him on a DEA ride-along to see how it works. Good going, Hank.

Marie isn't the greatest through most of Breaking Bad, but she is terrible in the pilot. She points out Skyler's weight, criticizes her career choices, and makes so many passive-aggressive comments ("at this rate, in 50 or 60 years you'll be rich") that it's a shock no one's kicked her out of the house. She also refuses to smile, ever, because Marie does not know joy.

Oh, Jesse. He's the best character on Breaking Bad, and yet in the series premiere, he's mostly just... dumb. His first scene has him falling out of a window, naked. He thinks it's a great idea to record himself making meth. When he tries to run away from Krazy-8, he trips and knocks himself out on a rock. He's also a big fan of homophobic insults, calling Walt a "f----t" and, later, "only the world's second biggest homo." He's not very sensitive, either, telling Walt that if Walt has depression, he needs to know because "it affects me."

Walt Jr. complains about showers and bacon, then proceeds to eat everything. Walt Jr. is the worst.

Krazy-8 is into dogfighting. Bogdan, the car wash owner, is incredibly condescending. The high school students in Walt's class don't care that their teacher is a brilliant chemist who nearly won the Nobel Prize. Everyone on Breaking Bad is awful — except for Gomez, who does nothing in the episode except be nice and act friendly, because Gomez is the best. If only his good-naturedness rubbed off on everyone else.