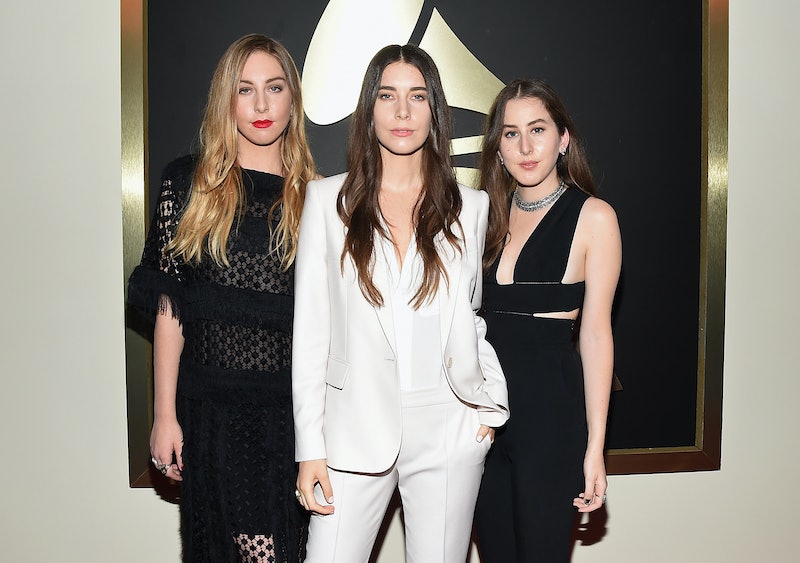 Este, Danielle and Alana Haim, aka the Grammy-nominated trio of rockers that make up the band Haim, are basically a walking ad for music festival culture. With their long, flowing brown hair and laid-back, '70s-inspired fashion, one look at these ladies will have you longing for a sunny weekend at Coachella. So it's no surprise that they don't fit in with the crowd when it comes to rocking formalwear.

Haim is up for Best New Artist tonight, and they certainly brought their A game to the red carpet. Even if they don't take home that highly coveted title, no one will forget their memorable looks any time soon. The sisters showed up at the 2015 Grammy Awards wearing black and white ensembles that are as cool as they are original. I haven't heard much about their red carpet fashion before tonight, but these stunningly bohemian and menswear-inspired ensembles have officially placed all three of them on my radar.

Este Haim paired her signature long blonde hair with a sheer black Chloe dress trimmed with wispy black feathers (think neo goth Daisy Buchanan) and a bold red lip. Danielle's center-parted locks went perfectly with her flawlessly tailored white Stella McCartney suit, nude pumps, and neutral makeup. And then there's Alana's look, quite possibly my favorite of the three — a pitch-perfect black jumpsuit (also Stella McCartney) with side cutouts and a silvery statement choker. All three outfits are bold and stylish in equal measure, a welcome respite from the sea of sparkly gowns that we're sure to see tonight.

Let's hope we'll be seeing way more of these three at awards shows in the future because their red carpet style is totally refreshing!