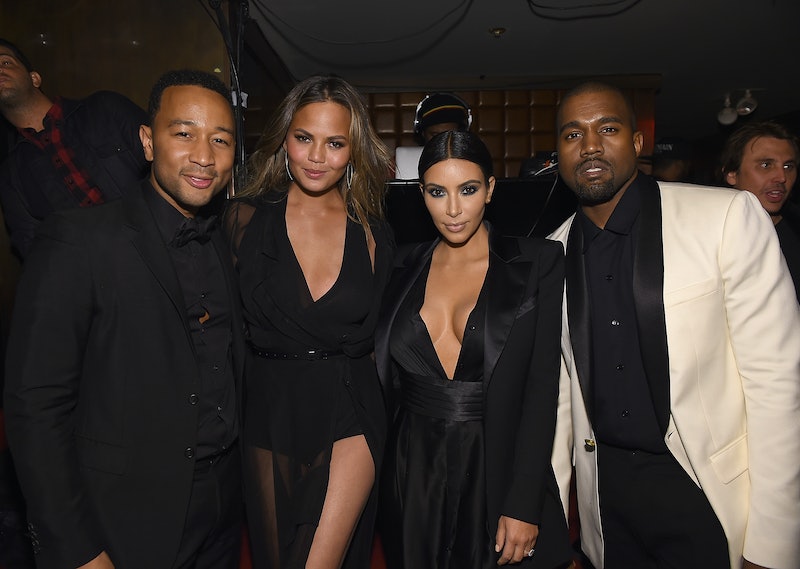 If you've ever found yourself wondering why exactly the sad Kanye West meme is actually a real thing on the Internet — or, alternatively, wondering why Kanye West is frowning in so many photos that someone felt it imperative to make a whole Tumblr account dedicated to it — good news: On this lovely Saturday afternoon, it seems the answer may have been revealed. In a new interview with Elle, Chrissy Teigen gave a possible reason for why Kanye frowns so often in photos — particularly, the now infamous one featuring her, husband John Legend, West, and his wife Kim Kardashian at a waffle house — and, simply put, it actually makes a lot of sense.

Kanye is so much fun. He's a wonderful person. What I love about Kim and Kanye is that I think they save their happy moments and their smiles for themselves, rather than sharing everything with the public... And listen, when a camera is shoved in your face trying to take a selfie you do not want to smile. And sometimes those photos get out. I don't want to smile in every photo I take. Can you imagine someone not asking you and grabbing you by the shoulder and pushing you in and forcing a photo? And not once, but a thousand times a day. I think people should understand that more.

Well, that explains it — and she has a point. Kim Kardashian and Kanye West are so open with their fans, sharing their lives through reality television and music, respectively — why can't they be allowed to keep at least one thing to themselves?

Plus, can you imagine how many fans Kanye West himself runs into on a daily basis? As a Yeezus fan, I know I wouldn't be able to help asking for a photo, so I can't imagine how many people request this from him every day. It has to be tiring.

Besides, who needs a photo of West forcing a smile just to please the media when we have amazing photos like this instead?